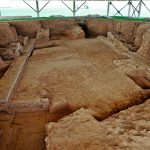 An important new discovery for the archaeological project, started over a decade ago and led by Pierfrancesco Callieri, professor at the University of Bologna, at the site of Tol-e Ajori (literally, ‘the hill of bricks’), in the Iranian province of Fars.

Excavations uncovered a monumental gate in Tol-e Ajori Gate, one of the most significant discoveries of Eastern archaeology in recent decades. The monument is a copy of the famous Ishtar Gate of Babylon, held at the Pergamonmuseum in Berlin.

The Gate – although larger in size and with some differences in structure – features characteristics similar to the Babylonian gate. The decoration is in fact identical, with compositions made of glazed bricks, partially preserved in the lower part, and low-relief decorations depicting the same animals on the Babylonian gate: the bull and the mythological hybrid mushkhushshu. The glazed bricks of the Tol e-Ajori Gate also originally had a blue background, which is no longer visible today.

The gate was intended as the monumental entrance to a royal ‘paradise’ similar to that built by Cyrus in Pasargade, 80 km north of Persepolis.

The excavation campaign, conducted experimentally with the Italian team communicating remotely with the Iranian team working on site, was necessary turn the site into a museum, after the construction of the permanent roof by the Iranian side, and was of particular scientific importance.

After the official inauguration of the archaeological site, scheduled for October 2021, at least one or two years of conservation operations will still be required for the area to be transformed into a museum. The monument will therefore remain as evidence of the Italian participation in the research and conservation of one of the most important archaeological sites in Iran.

The project is based on a partnership between the University of Bologna, the ISMEO – Associazione Internazionale di Studi sul Mediterraneo e l’Oriente, the Research Institute for Cultural Heritage and Tourism of the Islamic Republic of Iran and the University of Shiraz, with the financial support of the Italian Ministry of Foreign Affairs and International Cooperation. The project is led by Alireza Askari Chaverdi and Pierfrancesco Callieri.

The Italian-Iranian project also benefited from the support of the Fondazione Flaminia in Ravenna, the Lighthouse Group Srl in Casalecchio di Reno and the Iranian partners of the Research Institute for Cultural Heritage and Tourism, the Iranian Centre for Archaelogical Research, the Persepolis World Heritage Site and Shiraz University.