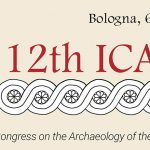 The first edition of ICAANE was organized in 1998 in Rome, on the initiative of Prof. Paolo Matthiae, Professor Emeritus of Archaeology and History of Art of the Ancient Near East at Sapienza University of Rome. Since then, the ICAANE has been an essential point of reference for all scholars of this fascinating region, crucial for the history of humanity.

Despite the current pandemic, researchers around the world have not given up confronting, imagining and reflecting together on the current state of research in the countries of the Near East. Over 860 registered participants had access to the Ibrida platform, an innovative technological infrastructure, which has allowed, in addition to live streaming, also Q&A sessions and private chats.

Eight themes were chosen for the Congress, which demonstrate the breadth of horizons of today’s archaeological research: ‘Field Reports, Environmental Archaeology, Hammering the Material World, Cognitive Archaeology, Modeling the Past, Networked Archaeology, Endangered Cultural Heritage, and Islamic archaeology’, for a total of 600 papers and 80 posters presented by scholars from 43 different countries.

The inaugural session on Tuesday 6th April, also available on the YouTube channel OrientLab, included, in addition to an artistic opening, four opening lectures chosen for their scientific relevance.

Ample space was given also to institutions involved in the protection of the historical and archaeological heritage. An extremely important political fact is to be noted: on April 8th, for the first time, the Directors General of Antiquities of the twelve countries of the Near East (Saudi Arabia, Cyprus, Egypt, Iran, Iraq, Jordan, Kurdistan, Lebanon, Oman, Palestine, Syria, Turkey) agreed to sit together and discuss their respective policies, research and conservation projects concerning the archaeological heritage of their countries, the current situation of surveys and excavations, emergencies derived from development works and intentional destructions, including the effects of the pandemic on field activities and tourism, as well as priority areas of action. The event represented a useful moment of confrontation also for interested institutions and scholars, who had the opportunity to clearly know how to apply for excavation and restoration permits: a great achievement for the protection of cultural heritage and Euro-Mediterranean cooperation.

An especially wide participation of scholars from Western Asia countries is to be mentioned, which provided further meaning to the mission of the congress, in particular with respect to the understanding of the current state of archaeological research in the Near East.

To allow young people to approach historical and archaeological research, the results will remain available to students and professors of higher educational institutions around the world, who are invited to register and watch video recordings on the dedicated platform from April 20th until May 15th. The proceedings of the 12th ICAANE will be published in open access format by Harrassowitz by early 2023, in order to share its scientific content with the largest possible audience.

The 12th ICAANE was also supported by the Department of History and Cultures of the University of Bologna and ISMEO, with Fondazione Alma Mater as technical partner. The Organizing Committee was chaired by Prof. Nicolò Marchetti, Full Professor of Archaeology and Art History of the Ancient Near East at the University of Bologna and director of the archaeological missions at Karkemish (Gaziantep, Turkey) and Nineveh (Mosul, Iraq), both supported by the Ministry of the Foreign Affairs and International Cooperation.