Important discovery in the context of a writing system used over four thousand years ago.

Linear Elamite script was used in southern Iran in the late 3rd and early 2nd millennium BC. (ca. 2300–1880 BC) by the Elamites (according to biblical tradition, descendants of Elam, one of Noah’s grandsons). This writing system was discovered in 1903, when the French campaigns in the city of Susa, in southwestern Iran, brought to light the first written documents that differed from those written in cuneiform script, as renown, of Mesopotamian origin. Around 1900 BC, the Elamite texts are supplanted by the Mesopotamian cuneiform in the documentation. Thanks to the coexistence and use of two different writing systems (Linear Elamite and Cuneiform Elamite) to note the same language (Elamite) it was possible to decipher the Linear Elamite. It is worth mentioning, among the numerous previous attempts at deciphering, that of the Italian linguist Piero Meriggi.

For the first time, a complete description and analysis of Linear Elamite is proposed, along with a discussion of Elamite phonology and the tendency to use two types of writing, especially in the first phase of documentation (for example, inscriptions engraved on monuments of Susa dating back to the 22nd century BC). The inscriptions on the silver glasses have also been compared with inscriptions in cuneiform and in the Akkadian or Elamite language, featuring in a second group of silver cups. Akkadian, of which Babylonian represents a later dialect, is a Semitic language well known to scholars since the second half of the 19th century.

By comparing the texts in the two forms of writing – which, although not identical to each other, show very standardized structures – it was possible to identify not only single words, but also entire sentences written in Linear Elamite script and in Elamite language. From the comparative study of the proper names of some phrases (for example, “There was a king named Puzur-Sushinak and a god named Insushinak”), it was possible to obtain the phonetic values ​​of nine signs of the Linear Elamite, used in turn to identify other names and obtain further phonetic values ​​(72 graphic symbols, more than 95% of known signs). This procedure also confirmed that the language of Linear Elamite was actually Elamite, or rather, a very archaic form of this language, called Old Elamite.

Following these discoveries, scholars have translated the more than forty lLinear Elamite texts known to date. The complete edition is, in fact, being printed in Bologna in the “OrientLab Series Maior” open access series. The deciphering made it possible to define how much the Linear Elamite was different from contemporary writing systems (Mesopotamian Cuneiform or Egyptian Hieroglyph). In fact, it is not a logo-syllabic system, in which graphic symbols represent both syllables and whole words, but a completely phonetic type of writing and, as such, represents the oldest example of such typology. While linear Elamite did not become a purely alphabetic writing, its symbols represented vowels, consonants, or syllables formed by the combination of a consonant with a vowel (for example ba, be, bi, etc.).

Elamite is, however, one of the oldest languages ​​in the history of mankind that have come down to us, for which it has not been possible to establish any linguistic relationship (language isolate). The deciphering of the writing system has allowed, on the other hand, to understand various previously unknown aspects of this language. If future excavations in Iran will uncover other texts in Linear Elamite, it will be possible to complete this work. Hopefully this advancement of the state of research can lay the foundations for the future understanding of another script, “ancestor” of the Linear Elamite, the so-called Proto-Elamite, used in Iran in the last centuries of the 4th millennium BC, at the same time as the proto-cuneiform in Mesopotamia and the first hieroglyphs in Egypt. 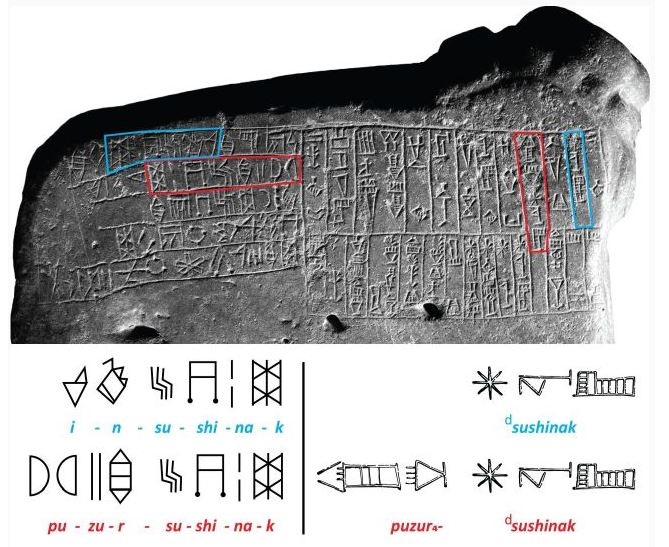 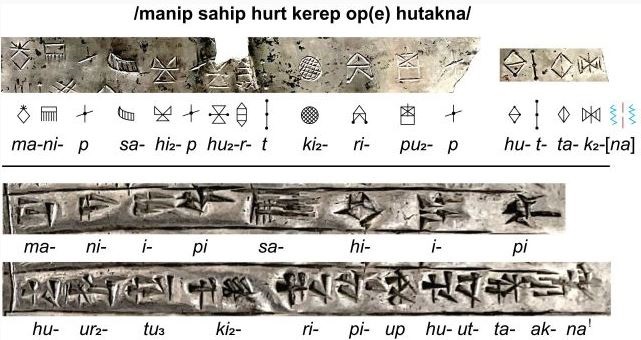