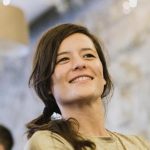 A dialogue with the Italian-Japanese artist on the project which has become a documentary for “italiana”.

In March-April 2020, during the lockdown period, Masako Matsushita, an artist of the Italian-Japanese movement, made her creative process called Diary of a Move (DOAM) participatory, which became a documentary for italiana, directed by Matteo Maffesanti, as part of OperaEstate Festival in Bassano del Grappa. More than 60 citizens from different countries became journal-writers, recording their daily movements. A multidisciplinary result was born from this process: a catalogue of human heritage given to the city, a performance and a personal exhibition at the Civic Museum of Bassano del Grappa together with all citizens on the meaning of movement.

How did Diary of a Move come about? How does it navigate the experience, common to all and so private for each of us, of the pandemic?

Diary of a Move is a creative process that originated in 2012. Since then 2 chapters have been developed.

The first chapter, entitled UK30 (where UK stands for United Kingdom and 30 the number of days dedicated to Diary of a Move), took place in London. It was a first personal exploration, to build the foundations and determine the parameters. I began keeping a diary in which to record a chosen/selected action over the course of a day for a whole month. I wondered at the time: Is it possible to find an alternative to or accompany daily writing through movement? What does movement archiving mean and how can I implement it? If the diary is a place of personal testimony, how can I also become one with the body? If my body were a museum, could I create a collection and become that collection in and through the body? If I collect a series of actions over a certain period of time, can I then reawaken the memory of that day after some time? How many details can I awaken?

In 2016 the second chapter entitled NOR14 | JP15 began (where NOR stands for Norway and JP for Japan, the numbers correspond to the days dedicated to Diary of a Move in the corresponding countries). This step was fundamental to continuing the process as I was able to put the pieces together and assess their potential. I realized the countless possibilities for recording and archiving movements and the peculiarities of two distant countries and the importance of documenting/capturing information. I made a public presentation to narrate and share the diary, emphasizing its cultural, social, historical, geographical and collective testimony aspects.

The third chapter began during the lockdown period in March-April 2020 with the intention of expanding thanks to the participation of an extraordinary group of people. Together we examined, each confined to their own rooms, houses, towns, and cities, how we moved in a historical moment such as this one. A circumstance that has involved us globally with the downside of confining us not only within our country but within our walls.

Diary of a Move is a creative process that has built a community from afar by accompanying people of different cultural backgrounds and different generations in creatively archiving gestures and movements from personal perspectives, to share them with others and to build an archive of movements together. The project brings together citizens who have experienced the social isolation of Covid-19 by inviting them to keep a diary of movements for a period of 14 to 30 days.

Diary of a Move brings about individual creative processes, connects people who have never met before living in different contexts, builds a sense of belonging to a group, develops a sense of shared responsibility, develops a sense of value in working and sharing together, and develops collective awareness in building a common cultural asset.

Diary of a Move is also the result of a relationship with the institutions that promote dance in the area, the OperaEstate festival and the Municipality of Bassano del Grappa. How did the collaboration work?

The collaboration with the staff of Operaestate Festival Veneto and CSC Centro per la Scena Contemporanea Casa della Danza of the Municipality of Bassano del Grappa was formidable and truly valuable. It has been diligent and continuous, from the very outset of planning. What has now become Diary of a Move is not just the result of the artist’s creativity: behind every great work there is a great team and each individual is essential for its success. There are few times that I have had the opportunity to feel part of a democratically involved and enthusiastic working group, and this is one of them. Even members of the organization took part in the creative process and this filled me with immense joy because living the experience first-hand allows you to truly understand the work. One of the obvious results of this collaboration was recognizing the individual skills of everyone involved, and engaging them from the very beginning in creating a collective work.

How is the innovative DOAM experience progressing now? What are your upcoming projects?

Diary of a Move, from which the documentary DOAM takes its title, is like a volcano: inside is boiling magma, waiting to erupt from time to time. When it erupts, it makes itself felt, representing the union of an infinity of elements, layers, thicknesses, temperatures, voices and stories.

I am currently looking for cities that can accommodate the creative process of Diary of a Move. Cities willing to collaborate together by inviting the project in and making it available to its citizens. I would like to be able to reach places of identity and explore subcultures located on the edge, on the margins, silenced, in order to collect their stories and give them a voice.
Another upcoming project is in collaboration with Matteo Maffesanti, the director of DOAM, with whom we are preparing a video-dance on Diary of a Move with an exploratory and innovative format that will début in October 2021.

Diary of a Move is part of the Dance & Dramaturgy European Network (D&D EU) 2021 programme which provides choreographers with the support of a playwright in the creative process for their dance project and the opportunity to benefit from a residency and exhibition in various European locations. The four partner locations are La Bellone Brussels (BL), Bora Bora Aarhus (DK), CSC Bassano del Grappa (IT), Théâtre Sévelin 36 Lausanne (CH). On this occasion, a show will be created that will showcase the stories and the heritage collected up to now.

Diary of a Move reflects on the body and identity, singular and plural – yours and everyone’s. Another “italiana” project, ‘Ritratti di donne’ (Portraits of women), also works on the theme of the plural and open identity of our country. Do you want to comment on it for our readers?

I don’t consider myself a critic or a writer. It has always been hard for me to speak to and communicate in words what I process and what I generate. I approach the wording as if it were a performance. I try to comment on ‘Ritratti di donne’ by following my intuition and developing spontaneous sentences, relying on what inspired me when reading and viewing the materials on the dedicated page.

‘Ritratti di donne’ arouses in me the curiosity to immerse myself and let myself be carried away by the voices of courageous and determined women. I am nourished by relationships and knowledge, strength and ambition, determination and complexity by exploring the biographies and related short videos. I reflect on the fact that listening to one woman’s story is like giving voice to that of many others.

We should talk more about our person and listen to what it has to say, what it represents, giving it space in all senses. Respect its body, its soul, its silences and passions, its frailties and potentials that are immense healers and generators of life.

I wonder: when does the word ‘woman’ begin? Is it necessary to cross a predefined age line or is it experience that brings out the word? What would it be like to be able to compare multiple generations?

Who is Masako Matsushita?

Masako Matsushita deals with movement analysis through research processes, choreographic projects, performative installations and social experiments. She creates structures and environments to explore the presence of the body in time and space by activating sensory perceptions, through memory and transmission, investigating methods of storage, linking cultures and aesthetics, identity and tradition.

She has been a resident artist in Europe and abroad, including; Residency Unlimited (NY), Visual Arts Center Pescheria Pesaro (IT), Erkki Hirvela Atelier Jämsä, PimOff Milan, CSC Garage Nardini, Pesaro experimental theatre, Petrella Longiano theatre among others. Masako has presented her works and collaborated with other artists in festivals including CivitanovaDanza 2.0 IT, Revnedans and Sånafest (NO), Drodesera35 Motherlode (IT), 16th Quadriennale of art in Rome (IT), The Erotic Cloth (UK), Swallowsfeet (UK), Neu/Now (NL), ITS (NL), Festival Mutiny (IT), B-motion (IT), Haut Festival (DK), Prospettiva Danza (IT).
In collaboration with the Norwegian artist Ingvild Isaksen they form the duo A MasIng Productions creating, to name a few, the works LAND SKAP vol.1/vol.2 produced by Sånafest Festival with the support of the DE.MO./Movin’ UP II 2016 session and promoted by the Ministry for Cultural Heritage and Activities and Tourism and GAI– Associazione per il la tournée di giovani artisti (Association for the touring of young artists).

Winner of the Perspective Dance Award 2018. She was selected for the New Italian Dance Platform 2019 and for Aerowaves Twenty20. Her work titled ‘UN/DRESS’ attracted academic interest. Barbara Brownie talks about it in Acts of Undressing Politics, Eroticism and Discarded Clothing (2016), and Lesley Millar and Alice Kettle in The Erotic Cloth: Seduction and Fetishism in Textile (2018), both books published by Bloomsbury.
Masako has collaborated in European projects such as: Dancing Museum – The Democracy of Being (2019/2021) with the support of the Italian partners CSC Centro per la Scena Contemporanea (Centre of Contemporary Theatre) of Bassano del Grappa with Arte Sella, Fondazione Fitzcarraldo, Università Ca’ Foscari, Vibes, a collective audio-choreographic performance. The promoters of the project are Orbe and the dance organisations CSC of Bassano del Grappa, Dansmakers ICK Amsterdam, C-DaRE and Ircam, and Dance & Dramaturgy European Network with partners such as Théâtre Sévelin 36 Lausanne, La Bellone Brussels, CSC Bassano di Grappa and Bora Bora Aarhus.
Masako is one of the founders of 4bid Gallery Amsterdam.

Diary of a Move IT