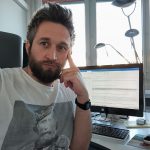 Francesco Ziosi was born in S. Giovanni in Persiceto, in the province of Bologna, in 1982. He studied Ancient History at the University of Bologna and at the Scuola Normale Superiore in Pisa. He entered the Ministry of Foreign Affairs in 2012 as a cultural officer, and was regent officer at the Italian Cultural Institute in Munich from 2016 to 2021. Since mid-August 2021, he has been Director of the Italian Cultural Institute in Zurich.

Could you describe the Italian Cultural Institute you direct and its history for our Italiana readers?

The Italian Cultural Institute of Zurich is the only foreign state cultural institution active in Switzerland: while the other European cousin institutes are either absent or have only exam centres, Italy has chosen to develop its own cultural activity physically in the country. This essentially has to do with the history of Italian immigration in Switzerland: the Institute was born in 1951, at the time of the first great migratory wave from the south of the Alps. We are a small institute, in effect three rooms inside the Consulate General: this penalizes us in some respects – we always have to use external spaces – but on the other hand it requires us to have a pretty solid awareness of the cultural panorama of Zurich. We aspire to be a fundamental point of reference for Italian culture in Switzerland, both for the public and for the institutions, when it comes to high quality discourse.

How would you describe the city and its cultural scene? What are the most important partnerships that the Institute has with other cultural institutions and practitioners?

The starting point is that one in two Zurich residents is not Swiss and Zurich is one of the richest cities in the world. There is a very important (and very well financed) institutional scene: the Tonhalle and Opernhaus orchestras, the Filmfestival, the Kunsthaus, and two of the world’s best universities; but also a very lively “off” cultural scene, with cultural youth centres, historic cafes, independent theatres. We try to keep an eye on both of them. We have well-established dialogue, at various levels, with all the institutions I have mentioned, with the Swiss National Museum, with Casa Jung and others besides. We also plan to work with other foreign representations active here; we are developing a photographic project together with the Kosovar Consulate. The synergies vary: often, the institutions are interested in the Italian-speaking public, and so we organize an Italian Rahmenveranstaltung around an exhibition held in a museum, or we try to develop synergies on themes that we share with other institutions, for example the Forum for Italian in Switzerland. Let’s not forget, we are in the only other country in the world that has Italian as its administrative language.

In a context in which all the components of the Sistema Italia contribute to and aim for overall success, what are the best experiences of this institute?

More than the best experiences, I’d like to talk about the best projects. In this sense, Zurich is a key city in the world for scientific research and architecture. In addition to the relationships we have with both the University and ETH Zurich, we are setting up work, together with the Consulate General, with the community of researchers and startuppers in Zurich through the AIRicerca network, to organize events to present scientific experiences in forms and with languages accessible to an untrained public, perhaps through dialogue between scholars and researchers of different backgrounds. Not many people know that the development of Swiss architecture was strongly influenced by the teaching, here at the ETH Zurich, of Aldo Rossi, whose students took Swiss architecture beyond Le Corbusier.

Our most important challenge at the moment is to go back to producing culture independently: this necessarily means reducing the resources given to initiatives developed by others, and at the same time it is an assumption of personal responsibility towards our public – as well as a lot more work, but we’re not complaining. This also has an important communicative aspect: it means going from financing body (among other things, with modest finances, for the city) to cultural entity that develops a legible and, in its variety, consistent offering. As for social networks, we try to use them partly to promote our business but above all to do another type of work, on the one hand giving space to news of the Italian cultural landscape, and on the other creating independent content that focuses above all on the cultural relations between Italy and Switzerland, which are close and often unexpected. The best communication, however, is always the quality of the offering. The reason for the many Ferraris, Lamborghinis or Maseratis in Zurich is that, around Modena, there are designers and engineers capable of conceiving the best cars in the world (and, I add, workers who know how to build them); not because they made the perfect ad.

Although in a gradual and uneven way in the different countries and regions, we are starting to come out of the emergency phase. The time has come to design the new normal. What approaches will it be appropriate to adopt in the light of the experience of this Institute? How do you imagine the coming years?

The emergency is starting to fade in our minds, partly because we’ve had enough and partly because there is a widespread feeling that we have done all that we could. For our activity, it is great to see how people have such a strong desire to get back to culture experienced live, in person, which in essence will return to being more or less the same as before. The real question therefore concerns the development of digital culture, the microbroadcasting of the last two years. My feeling is that the widespread technical mastery of digital platforms can serve as an accompanying tool and above all for the development of projects designed directly for digital. On the one hand, we must take advantage of the fact that the internet gives us online numbers, which are amazing for our Institutes, but at the same time the deterritorialization of the internet means we lose a little in our relationship with the country in which we operate. I don’t really believe, instead, that streaming live shows will take off: for that we need other means.