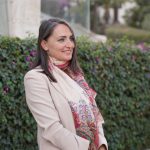 Interview with the Director Antonia Grande.

Graduated in Political Science at the University of Bari, Antonia Grande obtained the Diplome d’Études Approfondies en Droit Communautaire at the Faculty of Law of the University of Nancy II and a PhD in International Order and Human Rights at the Sapienza in Rome.  Following various study and research experiences at the University of Bilbao and at the European Court of Human Rights in Strasbourg, in 2003 she joined MAECI as a Cultural Promotion Officer, subsequently she served at the IIC in New Delhi from 2007 to 2013, the IIC in Bratislava from 2013 to 2016 and at the IIC in Algiers from January 2020 as Director.

The Italian Cultural Institute of Algiers was founded in 1963, immediately after the proclamation of the independence of Algeria, and since its foundation it has never stopped its activities, even in the difficult nineties when, due to the terrorism emergency, the other foreign cultural institutions left the country. This solidarity sharing of the Italian institutions, the Embassy, the Cultural Institute and ICE, has created a relationship with the Algerians that I would define as special. The Italian Cultural Institute in Algiers is a symbol of Mediterranean friendship. It is currently located in the El Biar district, on the city heights, in a colonial-era residence, and continues to characterize itself as an open cultural space, a destination for artists, intellectuals and young students, who love to entertain themselves in the halls of our library or in the gardens. that surround it. It represents a reference point for all those who – interested in Italian culture and language – wish to attend language courses, participate in cultural events and obtain updated information on scholarships and events in Italy. Even during the years of the pandemic, the dialogue with the public never stopped.

How would you describe the city and its cultural scene? What are the most important partnerships that the Institute has with other cultural entities and institutions?

The city of Algiers, al-Jazā’ir for Algerians, is a wonderful Mediterranean capital. In the “white city”, so-called by poets and travellers, cultures and civilizations that have crossed it coexist and merge. The cultural scene reflects this vocation, and is a manifestation of an original heritage in great ferment. Alongside the more traditional expressions, cultural containers and incubators are multiplying that aspire to open up to the world, especially the Mediterranean.
The Italian Cultural Institute promotes Italian culture in every artistic and integrated promotion sector, collaborating, together with the Embassy and ICE, with the most important Algerian institutions. I could mention, in the context of the excellent cooperation relationship with the Ministry of Culture and Arts, the National Museum of Fine Arts, the Algerian Centre of Cinematography, the AARC Cultural Promotion Agency, the National Theatre, the Opera of Algiers, the Oran Regional Theatre, the Constantine Jazz Festival, the Sidi Bel Abbes International Folk Dance Festival, the Symphonic Music Festival, the National Archaeological Research Centre, the Algerian National Higher School of Conservation and Restoration of Cultural Heritage, the Polytechnic School of Architecture and Urbanism. We actively collaborate in promoting the language with the Italian Departments of the Universities of Algiers2, Blida and Annaba and with the numerous high schools in the country that have chosen to include Italian in their teaching programmes. Among the cultural operators I would also like to mention the Algerian Youth Orchestra, a training project born from the idea of a well-known Algerian composer, fellow of our Institute, the Barzakh and Casbah publishing houses.
The Cultural Institute also participates in the initiatives of the Delegation of the European Union in Algeria, actively collaborates with the UNHCR, and has consolidated relationships with the other European representations within the European EUNIC programme, currently holding the presidency of the Eunic Cluster Algeria.

What are the most significant projects of the Institute’s programming?

The current year is a peculiar moment for the country, which celebrates sixty years of its independence, and which will host the 19th edition of the Mediterranean Games in Oran. In this particular excitement, I am pleased to be able to say that Italy will be among the protagonists. The reopening of the national exhibitions saw our country guest of honour at the International Book Fair in Algiers in which all the actors of the national economic system contributed to the creation of a prestigious programme in which numerous authors and publishing houses were involved.
Tosca’s two concerts represented the restart of live activities in grand style considering the depth of the artist and the local institutions involved. Tiziana Donati, aka Tosca, flanked by Pino Jodice on guitar, Elisabetta Pasquale on double bass and vocals, Luca Scorziello on drums and percussion, Fabia Salvucci on percussion and vocals, offered the Algerian public her latest work Morabeza, released in October 2019 which concludes a long journey through various countries of the world. The decision to bring the concert also to Oran was much appreciated by the public asking that cultural activities be extended outside the capital’s circuit.
Italy was also the guest of honour at DIMAJAZZ, Constatine Jazz Festival, an edition dedicated to women and in which the performance of the singer Ilaria Pilar Patassini with pianist Roberto Tarenzi, bassist Luca Pirozzi and drummer Alessandro Marzi aroused deep emotion from the press, the public and the organizers.
We have just inaugurated the Algerian stage of the photographic exhibition Eyes on Tomorrow – Young Italian Photography, a widespread exhibition created in collaboration with this Ministry and the Municipality of Reggio Emilia, in the presence of one of the curators (Daniele de Luigi) and one of the three artists on show (Marina Caneve). This will be followed by the realisation of the Italian Design Day in collaboration with the Ecole Polytéchnique d’Architecture et d’Urbanisme and in the presence of Dr. Simona Bordone of Domusweb, design ambassador for Algeria, who will hold two conferences for students of architecture and design and for the public of this Institute.
We will host the Algerian leg of the “Universo Olivetti” exhibition coming from Lisbon for a month.
We will participate in the 16th edition of the European Festival, organized by the Delegation of the European Union in collaboration with the Member States, with the singer Karima and her group who will perform not only at the National Theatre of Algiers but also at the Regional Theatre of Constantine. We will participate in the International Festival of Popular Dance of Sidi Bel Abbes with a group of dancers in collaboration with the Notte della Taranta and we will be part of the cultural schedule of the Mediterranean Games with a series of activities: film screenings, an artistic residency and a theatrical show.
In September we will present a prestigious exhibition of the “Italian artists’ Collection” at the National Museum of Fine Arts in Algiers – artists never exhibited to date, and an exhibition for which we are creating the catalogue.

Communication plays an essential role for our audience, who follow numerous activities on the website and on social networks. Algeria is a country with a high percentage of young people, and for this reason our social networks are very popular. We use three languages, Italian, Arabic and French, to reach all users, and we make photos and video footage of our events available, for greater involvement of those who follow us. During the pandemic, these tools allowed the extensive participation of the public both in the activities carried out exclusively online and in the activities in hybrid mode, where the containment regulations required a limited presence. This choice had unexpected implications, as we were able to involve people far away from the capital. We will therefore adopt the hybrid mode even when the limitations of the pandemic are over.
Alongside the website and social networks, we use more traditional forms of communication such as the newsletter for members and students and the e-mail transmission of invitations. We also continue to be very present in print, on paper or digitally, French and Arabic-speaking, and on national, French-speaking and Arabic-speaking radio and television networks. Our Facebook users have grown a lot in the last two years, going from about 7,000 to about 12,000 and also on the other platforms on which we are present (Twitter, Instagram, Linkedin, Youtube) the trend is growing.


Although in a gradual and uneven way in the different countries and regions, we are starting to come out of the emergency phase. The time has come to design the new normal. How do you envisage the next few years of activity?

The last two years have been complex, and our work has been aimed at ensuring the presence of Italian culture in the country through the ways that technology has made possible. We have never stopped our language courses, done online, or even our cultural activities. We offered online events without fail through the networks and as soon as it became possible we resumed activities in person or in hybrid mode, in compliance with the containment measures. I may add that, in collaboration with the Embassy and ICE, the time of Covid was also a moment for strengthening the already good relations with the country’s institutions, which the recent visit of our President Mattarella last November sealed and magnified. This was followed by other important institutional visits that have certainly increased our prestige and interest from the media and the public. The delicate international situation leads us to adopt a sober and measured approach, however this does not prevent us from expanding our sectors of activity and trying to intensify our presence in an immense territory. Today in Algeria, thanks to teamwork, Italy is increasingly a country of reference, whose culture manages to interface uniquely with Algeria. The new normal has already begun in Algiers.