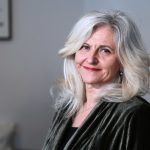 Founded in 1990 after reunification, the Italian Cultural Institute in Berlin started its activity in 1992. Since then, six well-known directors have taken turns, up to my direction which began in June 2020. In keeping with the great transformations of the German capital, the Institute moved between different locations to finally find a home, in 2003, in a wing of the Italian Embassy. It is an important building in the Italian and German collective memory: it was in fact built between 1938 and 1943, in the terrible years of National Socialist Germany. But it was never inaugurated. Damaged by Allied bombing, after 1945 it remained an imposing ruin of West Berlin for decades, close to the border marked by the Wall. The excellent restoration carried out in the 2000s did not want to hide the wounds of history, as in the case of the interrupted colonnade in the evocative inner courtyard. And today the Embassy together with the Institute meet again in the centre of the reunited city, not far from Potsdamer Platz.

The history of Berlin, like that of Germany, is a history of pauses, of continually interrupted continuities: from the neoclassical city of the early nineteenth century, to the modernist city of the roaring Twenties, from the devastation of war to the great architecture of post-reunification. Like the urban landscape, the cultural scene is also very rich and mixed. The Institute is involved in some crucial sectors in Berlin such as art, cinema and literature. It regularly collaborates with the exhibitions set up by the State Museums: in 2021 for Dante’s seven hundred years with the Kupferstichkabinett (and its 84 tables by Botticelli on the Comedy), in 2022 with the Gemäldegalerie for a large exhibition on Donatello. For the cinema, the Berlinale is a regular fixture every February. The German capital is once again an attractive city for the publishing world: many publishing houses have moved here, and many authors and translators live here. In addition to hosting numerous presentations, we are present at the Berlin International Literature Festival and Berlin Poetry Festival, and we cultivate consolidated collaborations with the Literaturhaus and the Literarisches Colloquium Berlin. The collaboration with the Italian Studies Centres in the German capital and in the regions that were part of the so-called East Germany is fundamental for the Italian-German academic exchange and contact with the younger generations: the Italenzentrum of the Freie Universität Berlin with four Berlin universities and that of Potsdam, the Polytechnic University of Dresden, that of the University of Leipzig and the Literaturhaus of Halle.

In a situation based on integrated promotion, where all the components of the “Sistema Italia” – network of Italian culture, economy, science and innovation – contribute towards and aim for the overall and specific success of one ambitious proposal (in its various forms), what have been the best experiences of this Institute?

The participation with the video Admiral Beatrice at the Dante in the world Marathon in 2021, in collaboration with the Ministry of Foreign Affairs (and International Cooperation), the  Book and Reading Centre, and the Corriere della Sera Foundation and the Italenzentrum of the Freie Universität Berlin, was a wonderful experience. The transversal collaborations with other institutes of the network are very productive, such as the international conference for the 100th anniversary of Andrea Zanzotto, with a session held at the Italian Cultural Institute in Paris and one in that of Berlin. An extremely positive experience takes place every year on the occasion of the International Book Fair in Frankfurt – publishing is the first Italian creative industry – to organize the literary programme together with the Italian Cultural Institute in Cologne, the Italian Embassy in Berlin, ICE and many German and Italian publishing houses.

In spite of the seesaw of lockdowns and reopenings, the Institute has never interrupted the dialogue with its public. The large event hall was not accessible according to the measures in force for the containment of the pandemic, and so we immediately created a conference room, equipped with technical equipment for live streaming, which also allows for a contingent presence. Yet we found different solutions, when for example in the autumn-winter 2020-2021 we were forced to close the photographic exhibition of Letizia Battaglia to visitors. But we got around the obstacle because we had already designed an interactive webdoc in parallel with the physical exhibition, a virtual visit in three languages, which, even as an autonomous digital production, had a considerable success in viewings.

I imagine them reactive, flexible and creative. We will always probe new twists between different forms of communication that relaunch the inalienable value of physical presence together with the plurality of languages offered digitally. We will continue our study format in live streaming, which has reserved for us considerable surprises, with an author in attendance, a remote author, and a literary critic among the spectators connected via zoom who the next day reviewed the book presented for a major national newspaper, the dialogue between writers and at the same time the ‘new normal’ form of the organized event.