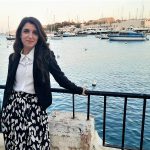 Interview with the Director Serena Alessi.

Our Section ‘Reflections on‘continues with the Istituto Italiano di Cultura di Malta and its Director.

Serena Alessi has a degree in European Languages and Literature and in 2015 she obtained a PhD in Italian Studies in London, where she taught Italian language and culture. Before becoming a cultural officer at the Ministry of Foreign Affairs and International Cooperation in 2020, she carried out academic research, mainly dealing with contemporary Italian literature and feminism. She has written about the myth of Penelope, postcolonial Italian authors, Alberto Savinio and Sibilla Aleramo. She has been director of the Italian Cultural Institute in Valletta since October 2021.

Could you give the italiana readers an overview of the Italian Cultural Institute you direct and its history?

The Italian Cultural Institute of Valletta was inaugurated in 1974 in its current location – the capital’s main square – by Aldo Moro, and has remained one of the most important cultural entities in Malta ever since. This privileged position enjoyed by our Institute is a consequence of the very strong historical bilateral relations between Italy and Malta , especially in the commercial field. Italian culture is somehow part of Maltese culture ; the history of the two countries has for many centuries been the history of a single territory, and in Malta, Italian is widely understood and spoken: for this reason the Valletta Institute can be considered unique in the Italian Foreign Ministry’s network.

How would you describe the city and its cultural scene? What are the most important partnerships that the Institute has with other cultural entities and institutions?

Given the exceptional geographical and cultural proximity between the two countries, the demand for Italian-ness in the archipelago is very high, and the Institute is committed to meeting these expectations . Due to the size of the island, the cultural scene the Institute forms  part of, is to be understood as existing more on a national level than on the level of its citizens. The Institute is in constant dialogue with the highest offices of the State and with the major cultural entities in the country, including the Manoel Theatre (the third oldest theatre in Europe), the University of Malta, the national body that organises the many lively cultural festivals, the Arts Council Malta, the Malta Philharmonic Orchestra and many others. Furthermore, all the various European cultural actors are concentrated in a small territory like Malta. The Institute is very proud to have been one of the main promoters of the EUNIC (European Union National Institutes for Culture) cluster , born last year and of which we currently hold the co-presidency. In short, this country of just over 300 km2 boasting three UNESCO heritage sites, undoubtedly reinvigorated since 2018 when Valletta was nominated European capital of culture, brings an intense cultural offering to the table.

In a situation based on integrated promotion, where all the components of the ‘Sistema Italia’ (network of Italian culture, economy, science and innovation) contribute and aim towards the overall and specific success of an ambitious proposal in its various facets, what have been the top experiences of this Institute?

In the last year, positive developments have strengthened the Italian system in Malta . The renewal of the heads of the diplomatic mission and the creation of a largely new team in the Institute was an opportunity to consolidate the very close synergy with which the Institute and the Embassy operate in the area. Furthermore, at the end of 2021 and for the first time in Malta, the Comites were formed, reflecting an increasingly numerous and strong Italian community on the island.

The most ambitious projects are undoubtedly those carried out together with local counterparts : in recent months, just to give a few examples, we have organised a splendid exhibition by Marinella Senatore together with an important local gallery; we have brought the choir of the National Academy of Santa Cecilia thanks to our collaboration with the Valletta Cultural Agency – the national body that promotes culture and sustainability in the capital; and the archaeological complex of Tas-Silġ will be the protagonist of special guided tours in Italian, thanks to the collaboration promoted by the Institute and the Embassy between one of the Italian archaeological missions present in the area and Heritage Malta, the national body for the conservation of cultural heritage.

What role does communication play in the Institute’s relationship with the public? What innovative strategies, approaches and ways of working have been adopted in recent times to maintain and facilitate this relationship?
Communication is perhaps one of the greatest challenges because when a project does not communicate well, all the upstream work is also useless. The Institute’s activities are always monitored by various local newspapers, however it is the care we put into creating original content on our social networks, on our site and on our newsletter that makes the difference. In a small country like Malta, we also have the advantage of being able to easily dedicate ourselves to bilateral communication actions , such as with schools or universities. This Institute invests a lot of time and energy in communication. And there is no more gratifying response than when, for example, a group of students come from Gozo specifically to attend a music event at the Institute the same day.

After the binge on virtual events over the last two years, worsened due to the unattainable panorama of competitors needed to create a good digital cultural project, the intention is to continue using the ‘virtual’ as a useful and important tool for in-depth analysis.  Not as an alternative mode of use, because creating an online event that is designed to be an in-person event does not necessarily mean creating the same event . I imagine the next few years to be full of events consisting of exchanges between people, tailor-made for all the spaces in which they can take place on the islands of Malta and Gozo. And I imagine these events happening within projects, with the Institute as a starting point and the content creator and in a cyclical fashion, ending with the Institute itself measuring their impact. Events that are unrelated to a long-term vision are not sustainable  in any way if you want to leave an imprint on the territory.