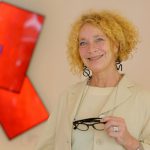 Ida Zilio Grandi teaches Arabic Language and Literature and Islamology at Ca’ Foscari University in Venice and is primarily interested in Islamic and Christian Arabic literature. Her major publications include a complete translation of the Koran (Mondadori, 2010), Il viaggio notturno e l’ascensione del Profeta nel racconto di Ibn ‘Abbas (Einaudi, 2010 – “The Night Journey and the Prophet’s Ascension in the Tale of Ibn ‘Abbas”) and Le virtù del buon musulmano (Einaudi, 2020 – “The Virtues of the Good Muslim”). Since 2015, she has been a member of the Council for Relations with Italian Islam at the Ministry of the Interior. Since 2019 he has been directing the Italian Cultural Institute of Abu Dhabi.

Our Headquarters, established in 2019 but not officially opened – given the many constraints caused by the pandemic – until 2021, is a “villa”, as they call certain white, vaguely colonial-style buildings here, which are all on Abu Dhabi Island, the central part of this city. It’s a three-storey building that looks late 19th or early 20th century but in fact dates from the 1970s.  The villa is part of a compound that also houses the British Council and the Goethe-Institut and is just a few hundred metres from the Alliance Française headquarters. We share a large terrace with the Goethe-Institute, which in recent months has been putting on the “Rooftop Cinema” series, with productions that in some way bring the two cultures together. At the start of the series, for example, we screened a very recent documentary on Pierpaolo Pasolini directed by a young German director. The furnishings on the ground floor are used for exhibitions. The first of these was Diva!, on glamorous jewellery from the 1950s to the present day. It marked the occasion of the official opening, reserved for local authorities – including the Minister of Culture Noura Al Kaabi – and international authorities. The second was an installation by Fabrizio Pless, on the occasion of the opening of our spaces to the general public.

How would you describe the city and its cultural scene? What are the most important partnerships that the Institute has with other cultural institutions and practitioners?

Abu Dhabi, like Dubai, the other major city in the Emirates, has for many years been pursuing a large-scale and shrewd project to promote culture, both native and international, classical and contemporary, with a view to diversification from oil-related activities. This is, among other things, part of the philosophy of the “father of the fatherland“, Sheikh Zayed Al Nahyan, the great promoter and implementer of this small confederation of states. The project includes the Louvre Abu Dhabi, which opened in 2017 and the massive construction sites of the Guggenheim and the Zayed National Museum, the latter of which is dedicated to local traditions. In addition to this, in the name of a culture of tolerance, there is the House of the Family of Abraham, which will house the places of worship of the three monotheistic religions in the same segmented space, together with a rich multicultural programme. And then there are the other public institutions: the Ministry of Education, which is supporting, among other things, the translation of children’s texts from Italian into Arabic; the Cultural Foundation and Manarat al Saadiyat, both of which host exhibitions and performing arts workshops, with large spaces for children Among the private institutions is the Abu Dhabi Foundation for Music and Arts, with which we brought some major concerts for Expo 2020 Dubai to Abu Dhabi. Other collaborations in the city are with Sorbonne University, which a few weeks ago hosted a “multicultural” concert by Tosca; with the Department of Culture and Tourism, a collaboration which opened last year with an exhibition on Italian and local illustrators and with the coordination of the National Pavilion at the Venice Biennale.

In a context where all the components of the “Italian System“ are working together towards overall success, what are the best results this Institute has achieved?

The fact that we have forged numerous successful relationships, and have done so very quickly, with the various institutions at national level. In Dubai we collaborate with the only independent cinema in the Emirates, the Cinema Akil. On the other hand, in Sharjah, the Emirate that represents, among other things, the country’s long-standing dedication to culture (its 19 museums are proof of this), we have held a major exhibition on Islam, water and art, thanks to the partnership between the Sharjah Museum Authority and the Fondazione Torino Musei. Another fine exhibition on Islamic art has just opened in Venice with the contribution of the Fondazione Musei Veneziani. In Sharjah we have also been working since the beginning with the Book Authority, which organises the most important book fair in the MENASA area. I would also like to mention the first Holocaust Remembrance Day celebration in this country, which was a few weeks ago, in the Crossroad of Civilizations Museum in Dubai. Apart from, of course, the wonderful and rewarding collaboration with the Italian Commissariat at EXPO 2020, another really exciting experience, which was a real challenge for us, was the series of 8 webinars – Dialogues on Innovation: The pandemic, human civilizations and the limits of technology. This was carried out in the midst of the pandemic between September and December 2020 and saw the participation of around forty intellectuals, experts and artists from Italy, the Emirates and other Gulf countries, all whom were asked to discuss the deeper meaning of “civilization” and the relationship between the experience of culture and physical participation. And then there is the hybrid series, which is still ongoing,  “Sai chi dovresti conoscere?” (Do you know who you should know?), two- or three- way conversations between cultural figures in the country, Italians and others. In addition to this there was ‘A Dinner with Dante’, a Dante-themed meal with an introduction on medieval Italian cookbooks, which took place last November for the Week of Italian Cuisine in the World, in collaboration with the Catholic University of Milan and an important restaurant in Abu Dhabi. More recently, Michele Nastasi’s photography exhibition, ‘Arabian Transfer’, was attended by an international audience that was, to say the least, flattering and completely unexpected.

Communication plays a huge role. When I arrived, publicising the existence of the Institute, especially given the long-standing pandemic, would have been impossible without making maximum use of the Institute’s website and social media channels. But, above all, the help of communication agencies already well established in the local media was crucial. However, in my opinion, even in a country like this one, which is undoubtedly at the cutting edge of technology, and where everyone has their mobile phones in their hands at all times, there is still no shortage of physical and personal presence, of human relations. For the IIC, this means being present at openings and events whether they are large and small, creating direct contacts with representatives of institutions, foundations, clubs, groups of compatriots, in short, openly involving people and asking them, quite simply, for their support for our projects.

How do you envisage the next few years of activity?

I imagine them to be increasingly intense in terms of activities that are actually attended, although everything will still be supported by digital communication. In general, our work will prove increasingly crucial for the dissemination of our culture and the creation of bilateral collaborations, joint efforts for shared cultural growth.
Italy has a lot to offer, and expectations of us here are very high. We are all looking forward to the imminent opening of the first Italian International School, and also to the launch of language courses at the Institute.
I will do everything I can to make the project of an Italian university in the Emirates a reality, similar to the Sorbonne or New York University in Abu Dhabi, or the Canadian and American Universities in Dubai. In this regard, the many relationships that we have facilitated between Italian and local university institutions are leading the way, and all this is thanks to the indispensable help of a large number of Italian researchers present all over the Emirates, who are highly esteemed and in excellent academic standing.  We got off to a good start and now it’s a matter of not letting down the expectations we have created, all while meeting commitments that are as flattering as they are demanding. The most important thing, a splendid occasion for us and for our Embassy, is our participation as guest of honour at the Sharjah Book Fair next November.