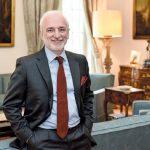 Our column Riflettori su (Spotlight on) continues with the Italian Cultural Institute of Cairo and its Director.

Born in Milan in 1963, Davide Scalmani, graduate in Modern History at the University of Milan, specialized in Teaching Italian as a Foreign Language at Sapienza University of Rome and in Evaluation Methodology at Roma Tre University. For the past twenty years he has worked in the field of cultural promotion for the Ministry of Foreign Affairs and International Cooperation, with various positions in Seoul, Boston, Mexico City, Vilnius, Madrid, Belgrade and, currently, in Cairo. A member of EUNIC, he is now president of the EUNIC Egypt Cluster. He has taught Italian Language and Literature at Sogang University, Seoul, the University of Massachusetts, Boston, and Translation Studies at the Universidad Complutense, Madrid. He has worked as a consultant and translator for publishing houses in Italy. His main interests include the history of ideas and translation studies. Among his publications: ‘Historia de Italia’ (History of Italy), Silex ed., Madrid, 2016; ‘Nazione e nazionalismo’ (Nation and Nationalism), Bruno Mondadori, Milan, 2000; ‘Guida allo studio della storia’ (Guide to the Study of History), Paravia, Milan, 2000; ‘Storia società lavoro’ (History, Society, Work), Archimede Edizioni, Milan 1999.

Could you sketch out a portrait of the Italian Cultural Institute you direct and its history for the readers of italiana?

The Italian Cultural Institute of Cairo is based in the historic and prestigious Zamalek district, a very special place. Zamalek is located on an island on the Nile (Gezira), and was the site of the Palace of the Khedives of Egypt and a beautiful garden. When the royal family decided to start selling the first lots, in the period between the two wars, they were immediately bought by many foreigners, especially from the British community. The Institue was based in an elegant private villa which later was the Embassy of Poland as well. Then, partly due to the vicissitudes of the Second World War and the post-war period, the site was abandoned. In the 1950s it was purchased by the Italian state and in 1959 the Italian Cultural Institute was inaugurated there in the presence of the then Prime Minister and Minister of Foreign Affairs, Amintore Fanfani, who was received by Nasser.
The Institute in Cairo was the fruit of the new way of doing cultural politics in the years when the first fruits of the Italian economic miracle were being enjoyed. The Institute had great Directors, starting with the first, the Arabist and Islamicist Umberto Rizzitano, born in Alexandria in Egypt, who played a very important role in the first years of the Institute. Rizzitano, a full professor of Arabic Language and Literature at the University of Palermo, belonged to the same school as the great Nallino (who was called upon by King Fuad to teach Arabic and help launch the University of Cairo). The Institute took care of translations from Arabic to Italian. In the 1960s the great exhibitions began and in the 1980s – 1990s the cultural dialogue that we have seen developing up until this day was established. I must also mention the Egyptologist Carla Maria Burri who directed the Institute for years, was a key player in bilateral cultural relations. Burri greatly valued Cairo’s unique position as the home of the only Italian Archaeological Centre abroad. After all, some of the greats at the beginning of the adventure of archaeology and Egyptology were also Italian. Today, as an Institute, we feel we are the successors of this significant Italian cultural presence.

Cairo is a difficult city to define. It is certainly a megalopolis with its more than 20 million inhabitants. Then again, it is also always changing, particularly in recent years. Cairo is a bit of a beacon of culture in the Middle East and North Africa, not only within the Arab world but also as a mediator between different cultures and East and West. It has a geo-political and geo-historical destiny, with a leading role to play. The first great Islamic schools in Egypt date back to the 7th-8th centuries and from then on, the whole development of Egypt’s contemporary culture took place here. This, then, is a vibrant, fascinating and complex cultural scene. Think, for example, of the modernization of Egypt. Since the 1800s with the beginning of the Khedivate, culture has led Egypt into modernity. The Western world also arrived here through culture and was reworked. Egypt quickly became a leader in cinematography and audio-visual production. Egyptian television series are very popular and Egyptian Arabic is the Koiné language of Arabic television. Then we have music. The first radio station to broadcast music in this region was Egyptian. In all of this, Italy has played a fundamental role. We can take the example of the Suez Canal. Music in the mid-19th century meant above all opera, and therefore Italian language and music. So an Italian, Giuseppe Verdi, was commissioned to create an opera, which was become Aida, to be dedicated to the enterprise of the construction of the Suez Canal. The sets were supposed to come from Paris but it was 1869 and the Franco-Prussian war was going on. Rigoletto was performed for the opening. However, Aida was only postponed. It was first performed in Cairo, in 1871: this year marks 150 years since that historic event (24 December 1871).

In a situation based on integrated promotion, where all the components of the ‘Italian System’ are contributing towards and aiming at the overall and specific success of an ambitious proposal in its various facets, what have been the top experiences of this Institute?

Although we are still going through an unusual period, in which there are still restrictions such as quarantines that make it difficult for various parties to reach us from Italy, several events have resumed, such as outdoor concerts.
We are therefore expecting an autumn involving a gradual return to normalcy. Here the percentage of people who have been vaccinated remains low but we have still been holding events. For example, our participation in the Cairo International Film Festival went very well, with the review dedicated to Fellini, who is considered a maestro by an entire generation of Egyptians. It featured newly recovered films and an exhibition of photographs by Cattarinich, Fellini’s main photographer. The review was held at the Cairo Opera House where five open-air theatre rooms were set up in record time: it had thousands of visitors. We also organized an evening outdoors on the terrace of the Institute with screenings of documentaries and short films. Italian design should also be mentioned among the major players. We created a collaborative platform called Cairo-Milano design with the participation of Fuorisalone and the involvement of El Beit magazine. At the Salone del Mobile in Milan, in Zona Tortona, there will for the first time be a space dedicated to Egyptian designers. There is this need for designers to be recognized around the world and in Italy in particular. But great prospects are also opening up for Italian design companies. Just think of the opportunities offered by the construction underway of the New Administrative Capital (the major project for a city of 6 million inhabitants that will move all administrative activities away from Cairo) and New El Alamein (for 3 million inhabitants).

We are staking almost everything on communication. The relationship with the public is all about communication. With the Institute, communication comes first. Communicating today is also one of the most difficult tasks we have and it is becoming increasingly more important and complex. The first aspect is more or less physical, where the offering consists of our teachers, our events. But communication today is also increasingly what we do online. I believe that we are carrying out an important task that now requires an increasingly pronounced professionalism and therefore also external collaborators, especially when we have new content online. The General Directorate for the Promotion of the Country System is doing an extraordinary job of promoting online work. Added to this are the contributions we are making. For the user, the difference hardly shows. Then looking at the numbers you immediately see the extent of the change taking place. Before this dramatic growth – also due to the Covid-19 situation – we had 8000 ‘friends’, today they are 20,000 and the numbers continue to grow (counting for example Facebook and Instagram). We also realized that special groups are now following us and that we need their feedback. We now have a ‘real institute’ and a ‘virtual institute’ and a unification of the various cultural aspects and actors that was unimaginable until recently.

Albeit gradually and not uniformly in every country and region, we are coming out of the emergency phase. The time has come to design the new normalcy. What approaches will it be appropriate to adopt in the light of the experience of this Institute has been through. How do you imagine the next few years of activity?

There are two different levels. On one level, there is this general transformation that can be foreseen and which will impact the cultures of work, namely remote working: an enormously transformative social process that is going to change the way in which society is structured. All of this clearly accelerated a process that was already underway prior to Covid-19. On a more specific level, I think that for cultural institutions, the dialogue with social media must be pursued—there is no alternative. So I think a whole range of activities that have been taking place online will continue to do so. Certainly no one could have predicted all the developments that are still undergoing a rapid evolution. I think there will be a stratification, perhaps by age, with different social media coexisting and covering different issues and needs. With the language courses we are already operating in this realm, we have moved over to these channels of communication. Thanks to the flexibility of our Italian teachers and the Egyptian students we went online in two weeks. We have also partially resumed in-person classes, so we’ll see how that goes. It is implausible to think of adopting a green pass solution in Egypt at this point, since the number of vaccinated people is so low. We must continue to analyze and monitor the situation. We are using common sense in our planning and scheduling, and allowing for a lot of flexibility.