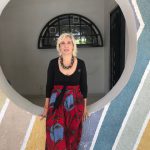 An interview with the Director Cristina Di Giorgio.

Though the last few months have been difficult for everyone, they have provided a unique opportunity for improvement and innovation. What innovations has the Institute introduced, firstly in order to deal with the emergency itself and then with the “new normal”? What role has new technology played?

All experiences are unique and this is particularly true for the Italian Cultural Institute of Dakar. When I got here, the Italian Cultural Institute was just about to open (or, in a way, to reopen). We were immediately able to organise a nice event for people to attend, but then, straight after, the pandemic broke out. We had to close the Institute to the public due to the health measures introduced to combat Covid, and we were forced to start again along a completely different line. At first, we didn’t even have furniture in the office… and we went online. Now, online, you can’t always get the same coverage that’s possible in Europe, for example. Having said that, in Senegal, as is the case in almost all of Africa, everyone has a mobile phone, so we immediately went on social media and this strategy worked very well. In the meantime, we have opened the Institute’s library and we have managed to make ourselves known despite being in the midst of the Covid-19 emergency. Here, the pandemic was seen as a health emergency that added to other health emergencies, and this helped the country to react. For example, Senegal’s neighbouring countries had gone through the experience with Ebola: here, they also applied the Ebola Protocol to the Covid-19 pandemic, immediately closing everything and imposing a curfew. This is a country that has received international recognition for its effective management of the pandemic.

We must always remember where we are: the history and the culture of each country. Compared with other experiences, in Senegal, this means reshaping our idea of cultural promotion and the range of activities we offer. There is a very strong, deep-rooted and much-loved indigenous culture… and perhaps not much curiosity for all things European. The challenge in Senegal lies in establishing real interaction: here, the Institute cannot limit itself to simply putting on show everything that Italian cultural has to offer, but rather it must propose cultural events that interact with the local culture. For example, this year, we’re celebrating the 700th anniversary of Dante Alighieri, who is not very well known in Senegal, except perhaps among those who have studied specialist subjects. We therefore wanted people to learn about Dante through the local language and culture, making it possible to achieve very interesting and impressive results. Pap Khouma, a Senegalese journalist and writer, who is a naturalised Italian and actually first learnt to write in Italian, is working with us to translate the first canto of the Divine Comedy into Wolof. In July, we will be presenting this project in Ravenna and then in Dakar in October. Seven Senegalese artists will be taking their inspiration from the canto translated into Wolof, producing works of art that will be going on display in an exhibition we’re organising for December. The first European exhibition at the Museum of Black Civilisations came from Italy, in 2019 – the Farnesina Collection, i.e., the contemporary art collection of the Ministry of Foreign Affairs and International Cooperation. The “Leonardo Opera Omnia” exhibition was enormously successful, allowing thousands of people to discover the work of this Italian genius. Senegal is home to great inventiveness, as is often the case in Africa, with recycling materials playing a very important role. We have engaged a non-profit organisation and a local art gallery to work together on the “Trash” project and, alongside this, a meeting will also be held with ENEA: this has the potential to be a very interesting partnership indeed. The role of returning Senegalese who have lived in Italy is also important for us; the fact that we reopened is also for them and thanks to them. The Senegalese community in Italy is among the most integrated and is the second largest in Europe, after the one in France: there are many mixed marriages and we are already talking about the second generation. Cultural contacts are intense. We have already mentioned Pap Khouma, but we have also welcomed the actress Virginia Diop (known for her role in ‘Zero’) as one of our online guests, and the volleyball player on the Italian national team, Valentina Diouf.

Can you provide a description of the Italian Cultural Institute you direct and its history for our Italian readers?

The Italian Cultural Institute in Senegal was opened in the aftermath of the country’s independence and operated until the mid-1990s. Then, as is the case with many activities, the Italian Cultural Institutes were restructured and the centre was closed. However, when the Ministry of Foreign Affairs and International Cooperation relaunched activities in Africa, the decision was made to reopen the Institute in 2019 (in 2020 with its own headquarters) and this was welcomed with great enthusiasm.

How would you describe the city and its cultural scene? What are the Institute’s most important collaborative relationships?

The cultural scene here is very lively. The most eagerly awaited event was actually cancelled in 2020: the Africa Art Biennial in Dakar, Dak’Art. A great deal of effort will certainly be made in order to organise it again in 2022. The country is very strong in and is internationally renowned for its musical culture, visual art and dance. Senegal boasts some incredibly high-level institutions, such as the École des Sables, which is one of the world’s top schools for modern dance; its founder, Germaine Acogny, won a Leone d’Oro at the Venice Biennale. Then there is the famous jazz festival in Saint Louis, a wonderful city-island and UNESCO World Heritage Site that was the French capital in colonial times. For the first time this year, the Italian Cultural Institute will also be taking part in the Dakar Partcours series of artistic events.

In some cases, events presumably had to be cancelled due to the pandemic. Are there any particular initiatives in the upcoming programme that you would like to tell us about?

A collaboration is currently underway between the Museum of Black Civilizations and the Museo delle Civiltà in Rome, which have signed a Declaration of Intent. The Cineteca project is also very important: two Italians living in Dakar discovered some film material lying in a building in Dakar. These are very interesting films, some of which are vintage, and they are very difficult to keep safe and protect as many are damaged. Both the Toulouse film archive and the Bologna film archive (for the restoration) were involved in this discovery and restoration project. The Film Directorate of the Senegalese Ministry in charge welcomed this project, with the idea of actually creating a national film archive. Then, of course, there is the translation of the first canto of the Divine Comedy into Wolof, as I mentioned before, which will also form the basis of an art exhibition and theatre workshop.