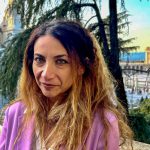 Passionate about music, art and with a strong interest in international relations, Marialuisa Pappalardo graduated in piano and experimental score reading, and studied musical composition at the Conservatorio di Santa Cecilia. In 2002, she graduated in political science from the Sapienza University of Rome with a thesis on diplomatic and consular law. After a period working at the ICE, she joined the Farnesina, serving abroad in Mumbai and Buenos Aires. Head of the Ministry’s cultural promotion division since 2017, she has been particularly responsible for the ‘Vivere all’italiana’ integrated promotion plan and the ‘Italia, Culture Mediterraneo’ (2018) and ‘Italia, Culture, Africa’ (2019) cultural promotion programmes. Since August 2020, she is the director of the Italian Cultural Institute of Madrid.

Could you describe the Italian Cultural Institute you direct and its history for our italiana readers?

The beautiful Palacio de Abrantes, located on the central Calle Mayor, a few short steps from the Royal Palace, has been home to the Institute since it opened in 1939. It is an iconic building in the city (an aristocratic palace for two centuries, the headquarters of an important newspaper and then of the Italian Embassy until 1936) and is thus the custodian of a prestigious legacy, one which  the Institute has always managed to live up to. If we were to imagine a documentary on the history of the Institute, we would see images of intellectuals such as Sciascia, Eco, avant-garde artists such as Carla Accardi and famous musicians, running up to the present, with key figures from the contemporary Italian cultural scene. I admit that it always makes us very proud to see groups of tourists stopping in front of our building and hear the guide say ‘this is the headquarters of the Italian Cultural Institute’. We are really a part of the past and present of this city.

How would you describe the city and its cultural scene? What are the most important partnerships that the Institute has with other cultural institutions and practitioners?
Madrid is a city with a great deal of cultural activity that embraces all artistic disciplines, combining a love for tradition with a real openness to contemporary creations. In this context, the Institute is a hub in the city’s vast cultural network, one in which major public institutions are active, along with key private actors. Among the institutions and organizations with whom the Institute collaborates we can note the Prado Museum, Patrimonio Nacional, the Fundación Mapfre, the Círculo de Bellas Artes, the Matadero, the Condeduque and various festivals, but the list is very long and is constantly expanding. In 2021, for the Dante celebrations, along with the prestigious Complutense, Autonomous and Carlos III Universities and under the aegis of the Embassy, we created ‘Madrid Città Dantesca’ at the Círculo de Bellas Artes, a joint programme of initiatives involving the entire city. This ‘exemplary’ model will be replicated this year for the anniversary of Pasolini’s birth. A lot of our activities take place in the beautiful Calle Mayor building, while many others are organized in other places in the city, in collaboration with local partners. This model of network partnership is also fundamental for carrying out initiatives outside Madrid, in our extensive area of coverage, where the demand for Italian culture is also very strong.

In a situation based on integrated promotion, where all the components of the “Italian System” – culture, economy, science and innovation – contribute towards and aim at the overall and specific success of one ambitious proposal (in its various forms), what have been the top experiences of this Institute?

The entire programme is based on covering the Italian System from all angles. In close coordination with the Embassy, we propose activities on the occasion of themed exhibitions (be it involving design, cuisine, research, Italian language or cinema) promoted by the Ministry of Foreign Affairs. We emphasise the cross-sector nature of many projects by collaborating with other actors, such as the ICE Agency, ENIT, and the Chamber of Commerce. I am thinking, for example, of the presentation of Geronimo Stilton’s book ‘Le mille meraviglie: Viaggio alla scoperta dell’Italia’ (The Thousand Wonders;  A Voyage of Discovery in Italy). There is also the Week of Italian Cuisine that acts as the backdrop to our Italian film festival. In addition there was the launch, together with the Embassy, of the BeIT campaign video, on the occasion of an amazing all-Italian video-mapping show which we organized. The connections between culture and technology fascinate us and right now our rooms are home to ‘Flusso di Conscience’ (Flow of Consciousness), an innovative project dedicated to immersive poetry experiences. It’s a collaboration with the Italian start-up Metaexperience.ART which, thanks to technology, is experimenting with new ways of enjoying culture. More generally, every initiative is an opportunity to say something about our wonderful country; we are a very important showcase for the Italian System.

Every activity and project must be accompanied by effective communications before, during and even after its realization. We are the ones who have to reach the public and should not think about it as being the other way around. It is definitely challenging, but it is an essential part of our work. We continue to maintain a presence in the press, whether in print or digitally, but today social networks are the preferred communication tool; we have understood not only the need for it but also the huge opportunities it presents. Depending on the channel we are using, we vary the tone, information and images. We distribute cultural content that the public can access ‘on demand’, at any time. We try to get the younger generations involved; we want to stimulate their interest, curiosity and engagement. I do not think I am exaggerating when I say that a minor cultural revolution is taking place in the field of communication.

Although in a gradual and uneven way in the different countries and regions, we are starting to come out of the emergency phase. The time has come to design the new normal. What approaches will it be appropriate to adopt in the light of the experience of this Institute? How do you imagine the coming years?

Unlike in other countries, here in Madrid the cultural venues did stay open, albeit with capacity limits and in compliance with the measures that were imposed due to the Covid emergency. In this context, our Institute did not come to a halt either, creating a rich cultural programme which was ‘tailored to Covid’. We organized exhibitions, as well as online and in-person meetings. We reworked the Film Festival in a hybrid form. Finally, we created new long-distance meeting projects between Italian and Spanish artists, which were designed specifically for digital and which helped to keep our splendid theatre alive. This urge to experiment with new forms of cultural production and consumption, which was born not only out of necessity but also out of a passion for our work, is something that we will bring into the new normal, together with the greater attention paid to digital technology. From now on, the latter will be seen as a tool in its own right and not just as a substitute for in-person activities, which is something that has opened up a world of new possibilities for us.
For the next few years, I envision a lively Institute that is an increasingly key player in the city’s cultural scene and with an even stronger presence throughout the whole area it covers. I think about it as an open and accessible place for intercultural encounters and exchange, a primary centre of reference for the promotion and production of new artistic creations.