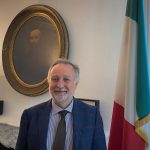 Interview with the Director Fabio Finotti.

Fabio Finotti studied at the Scuola Normale in Pisa, and is Professor Emeritus at the University of Pennsylvania, where he held the Mariano DiVito Chair and was Director of the Center for Italian Studies. His latest books include: ‘Italia: L’invenzione della patria‘, Milan, Bompiani.

Though the last few months have been difficult for everyone, they have provided a unique opportunity for self-improvement and innovation. What innovations has the Institute introduced, firstly in order to deal with the emergency itself and then with the ‘new normal’?

I took over as Director of the Italian Cultural Institute of New York right in the middle of the Covid-19 emergency, when the Institute had implemented controlled access and then restricted access. I immediately sought to create a ‘virtual institute’ even keeping the staff at work, combining, even in shifts, the various forms of face-to-face and remote work available to us. One of the first things I noticed, with so many people stuck at home without alternative resources, was the increased demand for cultural services, which led to an increase in our offering.  I decided to create a structure that would not be a mere repository of artworks: we Italians are also great architects. This was the origin of our new platform, Stanze Italian, which is a great success and is very easy to access. We also had to do some structural work and took the opportunity to upgrade the electrical wiring throughout the Institute. We need spaces that are a little different today. But I have to say that the audience has also changed; we no longer have just a New York audience, we have a global audience, there are those who follow us from other countries, like Australia for example. With these new technologies, the digital dimension allows access on a global scale.

Users of the Italian Cultural Institutes always expect events of the highest quality.  In your opinion, has the Institute’s audience kept up the same level of ambition in recent times? Have they been looking more for novelty or more for reassurance in recent months?

Here, I think that reassurance coincided with novelty. By proposing something new, we were able to show that Italy has continued to produce culture throughout this period, a very important and obviously very reassuring message. We were therefore able to work with Italian artists who have proved that they can persevere in their creativity.

Communication with your audience and their involvement in the Institute’s activities are bound to have changed. What role have new technologies played in this relationship? Have users been proactive? What was your experience?

New technologies today are no longer just a medium, they are also a language. Think of the ‘Prima della Scala’: it was a breakthrough in theatre with the people watching online who really felt like they were at La Scala. And then the ‘contexts’. Today, we are able to create a variety of contexts, e.g. even interviews with Directors: we have also done interviews with some of the most influential directors of cultural institutions here in the United States. All this of course with Italians but also with Americans who love Italy, of which there are always a vast number. There is what Bassetti called ‘Italicity’, which is very important here, the awareness of belonging to this collectivity of Italic peoples in the world. There are equally Americans who have chosen to be Italian, who are not Italian by birth.

You may have had to cancel events or rethink them to adapt them to the new situation. Some initiatives may have been salvageable, others might have been created as replacements, brand new. Are there any particular initiatives in the upcoming programme that you would like to tell us about?

We didn’t cancel anything. Everything we were planning to do, we did online. The first initiative to mention is ‘Il Caminetto’. These are the success stories, if you like, of Italians who have really made a good go of it. And there is also the mentoring dimension. For example, we interviewed Andrea Danese who has been successful in the world of finance.  We need to illustrate the message for young people with compelling examples, with success stories but also stories that demonstrate courage. We need to go back to wanting to travel far. What’s more, today we are no longer in an era of emigration but one of mobility. People don’t really think that they have to leave a country for good, but more that they can go back and forth between different places.

Could you describe the Italian Cultural Institute you direct and its history for our Italian readers?

The Institute was originally founded in the 1950s at the height of the economic boom, at a time when Italy wanted to ‘conquer America’. In 1958, a landmark building was purchased in New York. In the late 1980s, it was renovated and became the home of the Italian Academy. The building was constructed in the 1900s in a neo-Georgian style, with parts that came from Europe. The Institute in New York has been directed by some great and well-known figures (Furio Colombo from 1991 to 1994, Gioacchino Lanza Tomasi from 1996 to 2000 and, in more recent years, Giorgio Van Straten, 2015-2019). We have a large library, which is very well-known and has certain highly valuable volumes some received through prestigious donations.

Of course, in New York, there is a vast choice; we have to impose our own limits somewhat. The Metropolitan will re-open to the public with an exhibition on the Medici. Then there are a number of specific institutions tied to our culture, such as the Italian Academy managed partly by Columbia and partly by Italy, presided over by President Mattarella. We also have the Casa Italiana Zerilli-Marimò, very much aimed at young people, and the Calandra Italian American Institute. On a more literary level, there is the Primo Levi Center (Dante and Primo Levi are the only Italians whose works have been translated in full in the United States) and the CIMA/Center for Italian Modern Art, directed by Laura Mattioli, which has a fascinating exhibition on Schifano. There is also Magazzino Italian Art, which does a great job of promoting young Italian artists, as well as the International Opera Theater of Philadelphia, which is preparing a new work on Dante; yet another example of how young Americans are inspired by Italy.