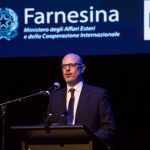 Interview with the Director Lillo Guarneri

Our Spotlight On feature continues with the Italian Cultural Institute of Sydney and its Director.

Lillo Guarneri was born in Sicily and before joining the Ministry of Foreign Affairs and International Cooperation in 2000, he was a legal prosecutor and official at the Ministry of Justice.  He has directed the Italian Cultural Institutes in São Paulo and Madrid and has been based in Sydney since 2017. He has a penchant for architecture, which he considers a form of artistic expression that can be enjoyed visually every day.

Though the last few months have been difficult for everyone, they have provided a unique opportunity for improvement and innovation. What innovations has the Institute introduced, firstly in order to deal with the emergency itself and then with the “new normal”?

We had several phases following COVID-19: in the first phase, from March to August 2020, we ran online courses and events.
From September 2020 until April 2021 we continued with activities in larger venues that allowed for attended events; concerts in cinemas, film screenings, and then, gradually, lectures at museums, participation in festivals, etc.
Since April we have been in the third phase so we have reinstated events and courses in the IIC, while maintaining some online courses and some online promotional activities via videoconferencing with Italy. In-person activity has gradually resumed at the Institute, but with special precautions: in compliance with the legislation for combatting COVID and after having drawn up an action plan approved by the State of New South Wales (NSW), which includes, among other things, a QR code attendance control system. A special COVID-19 risk evaluation document was also drawn up in compliance with Italian law. Therefore, special care should be taken to reduce the risk of infection, together with the utmost caution. We are actually quite a prominent institution in the city, which is closely associated with Italy, and the occurrence of a case in the IIC without having scrupulously complied with the law would be counterproductive for us.
The fourth phase will perhaps be in June 2022, fully back to normality, when the borders reopen. In fact, the country is currently locked down and it is even difficult for Australian citizens to return home. They have to comply with a staggered repatriation, followed by a period of quarantine – at their own expense – to be carried out in specially equipped hotels.

Users of the ICIs always expect events of the highest quality. In your opinion, has the Institute’s audience kept up the same level of ambition in recent times? Have they been looking more for novelty or more for reassurance in recent months?
I was pleasantly surprised by the ability to adapt quickly to all these often unpleasant changes. The IIC transformed the present courses into online courses in 2 weeks and in the same timeframe we cancelled all the 2020 events and reworked them in virtual form. It was hard work and I think it was done well. However, the psychological consequences of this sustained lack of in-person interaction, of so many hours spent at home, are yet to be verified. I already see some worrying signs in older people who now prefer not to leave their homes to come to our classes or events. This is perhaps due to fear or perhaps to a new habit of using new technological means. On the other hand, I noticed more flexibility amongst young people. So I would say, in general, that it was important to reassure the public, getting them used to new technologies. In terms of programming, what could have taken 5 years, was accomplished in 5 months. We all pushed for this change, with flexibility and adaptability. It’s a kind of miracle, unthinkable just a few years ago. As mentioned, however, we still have to discover other sociological implications of the issues.

Communication with your audience and their involvement in the Institute’s activities are bound to have changed. What role have new technologies played in this relationship? Have users been proactive? What was your experience?
I would say that the new technologies and the new way of delivering and participating in events and language courses has been accepted wholeheartedly. However, the vast majority of our attendees thankfully want a full resumption of in-person activities. As it stands, technology allows us to use certain senses, hearing, sight, but not smell, touch and palate (I am thinking of the events in the kitchen), and in any case the aspect of presence and the different ways of realising it (e.g. different, longer sessions, also made up of pauses, silences, interaction between the participants), are to be preserved and valued because they are very important for the success of the event and for human growth in general.

You may have had to cancel events or rethink them to adapt them to the new situation. Some initiatives may have been salvageable, others might have been created as replacements, brand new. Are there any particular initiatives in the upcoming programme that you would like to tell us about?
We had to cancel a lot of events, rescheduling some of them in different ways: online only at the beginning and then in-person (or mixed). Australia is a distant country and we suffer a little from isolation, but there are, at all levels, important local cultural resources. For example, for Dante 700 we involved local scholars from universities and national libraries. To arouse the curiosity of a wider audience, we will then invite Australia’s leading theatre actor, John Bell, who will recite Dante in the auditorium of the Art Gallery of NSW. Finally, incunabula from various collections related to the first editions of Dante’s works will be exhibited at the “Fischer Library”. By the way, here in Sydney there is an edition of the Divine Comedy from 1497 (with commentary by Landino) inside which, a few months ago, a sketch of a Madonna drawn on one of the last pages of the book was found by chance, and which seems to be attributed to Giorgione! The famous painter may have been the owner of this edition, and during a moment of inspiration he would have created this small and unnoticed work of art. There is also a commentary in the book which, if authentic, will reveal important new facts about the Italian painter’s life. There will therefore also be events dedicated to this discovery, which is creating an important dialogue with the Vatican Library. The latter has in fact agreed to compare this drawing with some of Giorgione’s sketches in its possession in order to verify this attribution.

Could you describe the Italian Cultural Institute you direct and its history for our Italian readers?
The Institute was founded in 1977, and covers about half of Australia and for the past 5 years New Zealand too. It is located in a welcoming, multifunctional (for courses and events) venue in the heart of the city, which is visited daily by many students and members, as well as occasional visitors. In 2019 we welcomed over 600 students and developed 70 events, which for a team of only 5 people is a very respectable and competitive achievement compared to what our colleagues from other European institutes are doing. Over the years, as the importance and international prestige of Australia has grown, so has the attention paid to this country by Italy and the Ministry.
The premises housing the Institute, unfortunately rented, are very well maintained. Every detail now speaks to the beauty of our country: from the Alessi tray with which we offer coffee (designed by Marco Trimarchi), to the Citterio sofas, the Unifor desks, and the lamps that illuminate the rooms in a particular way: seven designer lamps that were bought with funds from “Vivere all’italiana” to inaugurate an event on design, which has since become a permanent exhibition on the history of Italian design.
For the events, the choice is to always do events shared with  major Australian institutions, partly in order to avoid being too inward-looking. Furthermore, events must be designed and calibrated to the country’s audience: in the beginning, the country must be listened to for months…