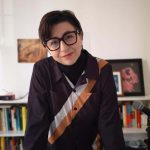 Portal of the Italian language
Categories: Culture and creativity -Literature and Publishing -Music and Performing Arts

The director of the show dedicated to Grazia Deledda talks about the project.

The Ministry of Foreign Affairs pays tribute to Grazia Deledda (Nuoro, 1871 – Rome, 1936), the only Italian writer to have won the Nobel Prize for literature in 1926, by making available to the global network of Italian Cultural Institutes, and on italiana, an extract (with subtitles in English, French, German and Chinese) of the performance ‘Quasi Grazia’ (Almost Grazia), from the play by Marcello Fois, directed by Veronica Cruciani and with Michela Murgia playing the leading role, produced by the Teatro di Sardegna.

Veronica Cruciani tells us about how this project was created and developed.

How did the decision come about to do a performance about Grazia Deledda and how does this project fit into your artistic story?

As a director, I was interested in the political value of Grazia Deledda’s private life. This is why I made certain decisions as director in this show; despite starting from three intimate moments of Deledda’s life told by Marcello Fois, the focus then shifts to investigating both the relationship between women and literature and contemporary women’s issues. None of the achievements that we enjoy today in terms of equality would have been conceivable without the courage of women who, while not explicitly engaging in political activity, were able to open paths towards independence, both for themselves and for those to come, through their life choices.

What were the main challenges of this project?

We combined Marcello Fois’s dramaturgy with a parallel staging that would allow us to investigate the different levels of the relationship between reality and creativity, between biography and art. For this reason, at several points during the show, the characters of some of Deledda’s stories are also evoked in a visionary way, bringing her dreamlike imagery to the fore and bringing a touch of magic and living literature to the stage.

What was the artistic collaboration like with Michela Murgia, who plays the part of the writer?

The choice of Michela Murgia, appearing on stage for the first time, was not made by chance; she is Sardinian, a writer and an activist for women’s rights. She was therefore perfect for creating a doppelgänger effect, in which her figure as a contemporary woman and that of the young Sardinian woman from the twentieth century would continually refer to each other as if in a counter-melody. During rehearsals, I tend to openly share the creative process, with this working method aiming to involve all the actors, going well beyond the individual parts to be played.

What does Grazia Deledda, the only Italian writer to have ever won the Nobel Prize, have to say in particular to today’s public in Italy and especially abroad?

When Grazia Deledda, not even thirty years old, left Sardinia to chase her dream of becoming a writer in 1900, her dream for art and autonomy would require a sacrifice that no man would have had to face: being torn from her land and her family. Even today, in every working and artistic sphere, women always have to prove themselves more than men do. To reach a goal, women have to make twice as much effort and have to dedicate three times the time. If we want to escape from certain labels, such as ‘wife’ and ‘mother’, we always pay dearly with our freedom.

Veronica Cruciani is a director and actress who graduated from the Civica Scuola di Teatro Paolo Grassi in Milan. In 2004, she founded the Compagnia Veronica Cruciani and went on to win the Critics’ Prize in 2008 and the Hystrio-Anct Prize in 2012. Among some of her most recent stage projects: she directed ‘The Coffee House’ by R.W. Fassbinder, produced by the Teatro Stabile del Friuli Venezia Giulia, and debuted with Carlotta Corradi’s ‘Accabadora’ – with Monica Piseddu and later with Anna della Rosa – based on the novel by Michela Murgia. In 2017, she directed ‘Quasi Grazia’, a play by Marcello Fois, produced by Sardegna Teatro with Michela Murgia playing the part of Grazia Deledda. In 2021, at the Todi Festival, she performed with the show The Fever by Wallace Shawn with Federica Fracassi.
She has taught acting and directing at the Civica Scuola di Teatro Paolo Grassi in Milan, Teatro di Roma – national theatre etc.

In cinema, she played one of the leading roles in ‘Viva la sposa’ (Long Live the Bride, 2015), by Ascanio Celestini, presented at the Venice Film Festival, and was in the cast of ‘Pecora Nera’ (The Black Sheep, 2010) by Ascanio Celestini, among other things. From 2013 to 2019, she was artistic director at the Municipality of Rome’s Teatro Biblioteca Quarticciolo.