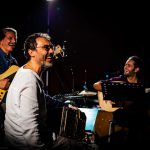 Portal of the Italian language
Categories: Culture and creativity -Music and Performing Arts
The music of the tradition of distant lands tells the warmth of the sun and fascinating timeless atmospheres.

On 6 June theItalian Cultural Institute of Bratislava will host the opening concert of the 15th Italian festival ‘Dolce Vitaj’, to be performed by the Trio Di Bonaventura-Nardi-Tavolazzi.

The group will perform in Slovakia for the first time moving between ethnic music, jazz, tango and classical music, to convey to the public a visual and acoustic experience of great depth.

The compositions will form part of the tradition of distant lands, of Latin America, the Middle East, North Africa and Southern Europe, each sound recounting the warmth of the sun and fascinating timeless atmospheres.

The leader Daniele Di Bonaventura, an accordionist, has played in major international festivals and has worked with musicians of the calibre of Enrico Rava, Paolo Fresu, Stefano Bollani and many others. Among the various prizes received is the German Critics Prize for the CD ‘Universal Syncopation II’ published by ECM Records (with Miroslav Vitouš).

Elias Nardi has further examined the study of the Oud (Arabic lute) with his numerous trips to the Middle East. He took lessons from the Palestinian virtuoso Adel Salameh, forming a personal approach to the instrument while keeping full respect of the lute tradition of that land.

Ares Tavolazzi studied cello and double bass at the Ferrara Conservatory. From 1973 to 1983 he was part of the legendary Area group, together with Demetrio Stratos, Patrizio Fariselli and Giulio Capiozzo, recording ten albums with the group and participating in numerous international events. Frequenting the musical circles of New York during that period, he became influenced by jazz.