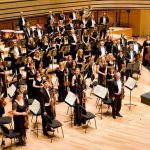 Portal of the Italian language
Categories: Culture and creativity -Music and Performing Arts
Cristina Pegoraro and Lorenzo Porzio perform at the Summer Evening Festival of the Croatian National Theatre.

In the setting of the Summer Evenings Festival of the Croatian National Theatre in Zagreb, the Italian Cultural Institute of Zagreb will present the concert “Fantasia italiana” on 9 June, with Cristiana Pegoraro on piano and Lorenzo Porzio conductor and with the Budapest Symphony Orchestra MÁV.

Cristiana Pegoraro and Lorenzo Porzio propose the best known repertoire of the great Italian musical tradition, from the baroque of Vivaldi’s “The Four Seasons” to the romanticism of the interludes by Puccini and Mascagni, passing through the overtures of Rossini and Verdi, in the unpublished transcriptions for piano and string orchestra by these two musicians: this is a larger version of the programme already performed at the prestigious Carnegie Hall in New York in 2019.