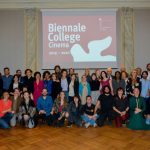 Fare Cinema 2022 launches the partnership between the Italian Ministry of Foreign Affairs and International Cooperation and Biennale College Cinema, the project by La Biennale di Venezia dedicated to training young people in the film industry, which in 2022 has reached its 11th edition and which involves participation in a international co-production by teams of new directors and producers.

Among the many works that the BCC calls have helped to produce, four films have been chosen, all from recent years and directed by women:

The four films, with the creative and production team, will begin a journey that, in various forms and thanks to the support of the diplomatic-consular and cultural network of the Ministry, will take them to several cities, starting from Washington (June 22) and Sarajevo (June 29).