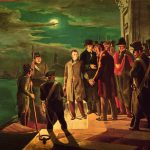 Portal of the Italian language
Categories: Culture and creativity -History and current events -Literature and Publishing
A varied programme celebrates the bicentenary of the imprisonment of the patriot and author of "’Le mie prigioni’.

In commemoration of the bicentenary of Silvio Pellico‘s incarceration in the Habsburg prison of Špilberk Castle, the City and Museum of Brno, in collaboration with the Italian Embassy in Prague and the Italian Cultural Institute in Prague, pay homage to the patriot and writer with a varied programme of ceremonies and cultural initiatives scheduled from 20 to 22 May.

In addition to the inauguration of the new layout of the cells in which Italian revolutionaries such as Silvio Pellico and Piero Maroncelli spent the days of their long imprisonment, Špilberk Castle will host conferences, debates, screenings of films and documentaries and presentations of recent publications dedicated to Silvio Pellico.

Of particular note: the bilingual graphic novel ‘Silvio Pellico. Spielberg 1822-2022 / Špilberk 1822-2022′ , scripted and illustrated by the cartoonist Eugenio Belgrade and edited by the Eleutheria Foundation in Prague, inspired by Le mie prigioni (My Prisons) – the memoir published by Silvio Pellico after his release and return to his homeland – and the essay ‘Pellico, turista per forza. In viaggio per le prigioni di mezza Europa’ (Pellico, tourist by force. Travelling the prisons of half of Europe; Kellermann editions) in which the author, the journalist Sergio Tazzer, retraces Pellico‘s long and troubled journey from Venice to Brno.

In addition, Professor Francesco Leoncini, scholar of the history of Slavic countries and Central Europe, will give a lecture entitled ‘Il Risorgimento come fattore di riscatto delle nazionalità slave: Mazzini and TG Masaryk’ (The Risorgimento as an element of redemption of the Slavic nationalities: Mazzini and T.G. Masaryk).