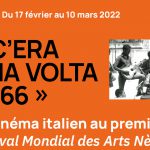 Portal of the Italian language
Categories: Cinema and Audio-visual
In Dakar, some films that were at the center of the important pan-African initiative in 1966 will be screened, as well as Sergio Borrelli's documentary "Il festival di Dakar", which recounts Italy's role in that event.

The Italian Cultural Institute of Dakar and the Atelier MamiWata Association, under the patronage of the Cinema Directorate of the Senegalese Ministry of Culture, present a cycle of Italian documentaries and films related to the World Festival of Negro Arts, one of the major pan-African cultural events of the Continent and the Diaspora.

Since 2019, the Atelier MamiWata Association has been involved with the project of safeguarding and enhancing the audiovisual archive of the Directorate of Cinema of the Senegalese Ministry of Culture, and has recently rediscovered some documents concerning the First World Festival of Negro Arts, held in April 1966 in Dakar, which revealed that the Italian presence and technical collaboration was a decisive contribution to the success of the film section of the festival.

The initiative, which runs from 17 February to 10 March 2022, is a tribute to the festival and a rediscovery of the relationship between the two countries through the seventh art.

The opening screening, in the prestigious venue of IFAN – Musee Theodore Monod, is an absolute premiere in Senegal of the documentary ‘Il Festival di Dakar’, filmed during the ’66 event by the journalist Sergio Borrelli, who recently passed away, and granted by the Rai Teche.

Italy not only stood out behind the scenes of the organisation of the cinema section, as Borrelli recounts in his documentary, but was also a protagonist with the presence of six films within the competition. Among them, Folco Quilici’s ‘La scoperta dell’Africa’ won the prize for the best documentary. Two episodes of Quilici’s series ‘Gli anni del risorgimento’ and ‘L’Africa scopre sé stessa’ will be screened on 24 February.

On 3 March, two films by Gianni Amico will be presented: ‘We insist! Suite for immediate freedom’ and ‘Notes for a film on jazz’, which were in competition at the festival and tell the story of jazz in the context of the struggle for the rights of black Afro-Americans.

The programme closes on 10 March with a masterpiece of Italian neo-realist cinema, ‘Miracolo a Milano’ by Vittorio De Sica, a film mentioned in the documents of the Senegalese archives, destined to integrate the collection of the national film archives.

For more informations, go to iicdakar.esteri.it