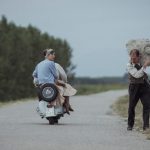 Portal of the Italian language
Categories: Culture and creativity -Cinema and Audio-visual
A new edition of the festival that brings the best Italian cinema to Malta.

‘Cinema Italia @ Malta’ is back, after last year’s online edition, in theatres, with five premieres, bringing the best of contemporary Italian cinema to La Valletta: ‘Notturno’ by Gianfranco Rosi , ‘Hidden away’ by Giorgio Diritti, ‘Via con me’ by Giorgio Verdelli and ‘Martin Eden’ by Pietro Marcello.

The review closes with a tribute to Dante, in the year of the celebrations for the 700th anniversary of his death, with the screening of the film adaptation of ‘Inferno’ (1911), directed by Giuseppe De Liguoro, Francesco Bertolini and Adolfo Padovan. The restored version of the film is accompanied by a live concert by musician Marco Castelli.

‘Cinema Italia @ Malta’ is an initiative of the Italian Cultural Institute in Valletta , organized together with Spazju Kreattiv, realized in collaboration with the MA in Film Studies at the Faculty of Arts, University of Malta and sponsored by the Embassy of Italy.