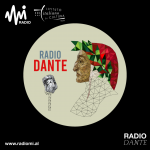 Portal of the Italian language
Categories: Literature and Publishing
The Italian Cultural Institute of Tirana offers a stereophonic journey into the verses of the Florentine poet with the experimental podcasts of Francesca Fini for RadioMi.

The verses of Dante Alighieri make up the twenty-one episodes of the Radio Dante project, an experimental podcast conceived by Francesca Fini and commissioned by Italian Cultural Institute of Tirana and RadioMi, to celebrate the seven hundred years anniversary of the death of the Florentine poet.

The voices of the actors – Daniela Cavallini and Daniele Sirotti, supervised and trained by the scholar Emanuele Di Silvestro – move in a suggestive and at times unsettling sound landscape, scripted by Francesca Fini and developed in three-dimensional space by sound designer Boris Riccardo D’Agostino. An enveloping soundscape, which seems to tell the story of a road-movie set in the contemporary world, dragging the Dante universe into the present. Dante’s works, in the version used in the podcast, are reproduced with the kind permission of Salerno Editrice. There are sonnets, ballads, a lyrical sestet and songs that speak of love, life and death, friendship and exile. Some of the works have been chosen because they are little known to the general public, along with others that are very well-known.

The podcast streams every Monday on RadioMi, at 11am and 1pm, Italian and Albanian time, respectively, with repeats at 4pm and 6pm. The episodes aired will then also be available on the player of radio-dante.com