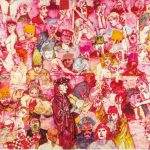 Portal of the Italian language
Categories: Culture and creativity -Visual Arts -Literature and Publishing
An exhibition of works by the Argentine master inspired by the great Florentine poet.

The Italian Cultural Institute of Buenos Aires and the Museo Nacional de Bellas Artes are organizing the exhibition ‘Dante x Alonso‘, which can be visited in the Museo Nacional de Bellas Artes from 4 December 2021 to 27 February 2022 . The exhibition includes a selection of more than 40 works from two collections, that of the Carlos Alonso de Mendoza Museum and the artist’s private collection.

Carlos Alonso’s extensive career (Mendoza, 1929) has played a key part in Argentine art from the mid-twentieth century to the present day. The artist drew inspiration from Dante and his denunciations of the past in order to offer a visual account of the crises that still haunt our present. Alonso proposed this exercise on two historical occasions, for the first time in 1968 and for the second time in 2004.

In March 1968, the artist went to Florence, where he stayed for six months with the intention of immersing himself in Dante’s universe, enabling him to create a series of pieces inspired by his life and work. His work focused on revisiting the poet’s experiences, bringing his personae back to the level of everyday life. The question of what Dante would see today, what his view of the contemporary world would be, led him to create more than 250 works of art.  Made in a small format, they present multiple versions of the portrait of the Florentine poet replicated using different techniques.

In 2004 he began a series of works on paper entitled ‘Carlos Alonso in hell’, some of which are part of the exhibition, and in 2008 he created a series of three-dimensional works based on the poet’s face. As in other moments of his career, Carlos Alonso worked on a classic in order to offer a raw and personal critical interpretation, while exposing multiple problems and injustices of the present day.

This initiative is part of the celebration of the 700th anniversary of the death of Dante Alighieri (1265-1321).