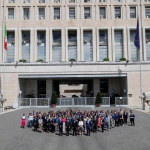 Portal of the Italian language
Categories: Culture and creativity -Language and education
Italian and American scholars return to the Ministry of Foreign Affairs.

On 10 June, after a break of more than two years, the Ministry of Foreign Affairs and International Cooperation (MAECI) welcomed Fulbright students and researchers to the event that it traditionally holds for Italian scholars leaving for the United States and their American counterparts who are approaching the end of their studies in Italy.

Now in its 76th year, the international exchange programme created by senator J. William Fulbright in 1946 therefore returns to being properly celebrated in person with its young participants.

The event, which was organized by the Fulbright Commission, opened in the International Conference Room with addresses from the Minister of Foreign Affairs, Luigi Di Maio, and the General Director for Public and Cultural Diplomacy, Pasquale Terracciano, which were followed by speeches by Thomas D. Smitham, the Charge d’Affaires at the U.S. Embassy in Italy, and Paola Sartorio, the Executive Director of the Commission.

Every step I have taken in my life has led me here, now.’ Likewise, in your here and now, there will always be Italy, the United States and, naturally, Fulbright: a legacy of knowledge, bonds and values which you can use as representatives of a Euro-Atlantic soft power built on liberty, openness and a willingness to talk.

Ambassador Terracciano addressed more than 100 scholars in attendance, finishing his opening remarks by citing the work of Alberto Garutti, which is present in the Farnesina Art Collection. For his part, Minister Di Maio reiterated the historical significance of the Fulbright Programme in shaping Italian Atlanticism from the post-war period to today, underlining how the values that make up its mission are ‘the same as those on which the solidity and the relevancy of the excellent relationship between Italy and the United are based.  A relationship which today reveals an extraordinary convergence of ideas and action’.

At the end of the institutional session and following a group photo in the square in front of the Farnesina building, the ‘Fulbrighters’ had the opportunity to talk to one another in round tables which were organized into discussion groups and split on the basis of their different areas of study (science and technology, humanities, social sciences).

Later, the students and researchers were taken through the Ministry’s hallways to explore the Farnesina Art Collection before meeting again in the Conference Room for the conclusion of proceedings.  At this point, speeches were given by Alessandro De Pedys, Chair of the Fulbright Commission and Principal Director at MAECI for the Promotion of Italian Culture and Language, Rakesh Surampudi, Cultural Attaché at the U.S. Embassy in Rome and Vice-President of the Commission, and Paola Sartorio, Executive Director.

An evening reception held at the U.S. Ambassador’s residence at Villa Taverna marked the end of a busy day of activities.