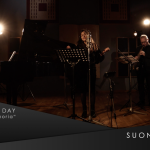 Portal of the Italian language
Categories: Music and Performing Arts
For Holocaust Remembrance Day 2022, the Italian Cultural Institutes of Los Angeles and San Francisco are offering a journey into Jewish culture.

On the occasion of Holocaust Remembrance Day 2022, the Italian Cultural Institute of Los Angeles and the Italian Cultural Institute of San Francisco, in collaboration with the Consulate of Italy in Los Angeles and the Museum of Tolerance,  are offering a concert through which to discover the musical culture of Klezmer and Yiddish song. It is a genre that has over four centuries of history and which, having come from Eastern Europe to the United States, has been of great importance to the development of jazz music, particularly for figures such as George Gershwin, Benny Goodman, Mickey Katz and John Zorn.

The concert will feature Gabriele Coen, one of the leading exponents of Klezmer music in Italy, the pianist Pietro Lussu and the singer Barbara Eramo.

The video will be available for free on YouTube from 27 to 31 January and on the platform from 27 January to 6 February 2022, subject to registration. The programme will include performances of the following pieces:

Gabriele Coen, saxophonist, clarinettist and composer, has been exploring the connections between jazz and ethnic music for years, Mediterranean and Eastern European music in particular. He is the founder of KlezRoym, a well-known Italian ensemble dedicated to bringing Jewish musical tradition up to date, and has composed the music for numerous films, including ‘Once We Were Strangers’ by Emanuele Crialese and ‘Night Bus’ by Davide Marengo. In 2013 he released the album ‘Yiddish Melodies in Jazz’.

Pietro Lussu, from Rome, began studying classical piano as a child. With Rosario Giuliani’s quartet he won the first prize for the best group in the prestigious Europe Jazz Contest in Brussels, the starting point for an intensive international concert career. His elegance and sensitivity have paved way for numerous record collaborations. In 2019, he founded the Gibigiana Records label with Alice Ricciardi. Their debut release is ‘Catch a Falling Star’.

Barbara Eramo was born in Taranto and lives in Rome. A versatile and surprising performer, close to the sounds of major international figures (Bjork, Tori Amos, Nick Drake) without betraying his Italian roots, he has collaborated with various personalities of Italian music, first of all the Oscar-winning Nicola Piovani.