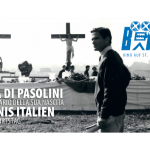 Portal of the Italian language
Categories: Culture and creativity -Cinema and Audio-visual
A retrospective dedicated to the great writer and director, 100 years after his birth.

The Italian Cultural Institute of Hamburg, in collaboration with the B-Movie cinema, presents a film festival entitled ‘L’Italia di Pasolini’ (Pasolini’s Italy) on the occasion of the centenary of his birth.

Unforgettable films by one of the most influential figures in the history of the twentieth century, Pier Paolo Pasolini, the poet and director who made writing and directing an act of resistance, are scheduled from 5 to 31 March.

The intention of the retrospective is to reconstruct Pasolini’s vision of Italy from the ‘60s to the ‘70s, starting with the social dramas ‘Accattone’ and ‘Mamma Roma’, passing through the poetic cinema of ‘The Hawks and the Sparrows’ and some of his short films, up to his documentaries.

It is an invitation to look back and rediscover Pasolini, including through the eyes of Pepe Danquart, who has recreated Pasolini’s journey through Italy in his film entitled  ‘Vor mir der Süden’ (Ahead of Me the South).

In conjunction with the series of screenings, the Italian Cultural Institute in Hamburg is hosting  ‘Nell’ombra della primavera’ (In the Shadow of Spring), a literary meeting in memory of the great poet and director.

For more information, go to: iicamburgo.esteri.it