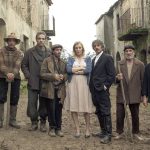 Portal of the Italian language
Categories: Culture and creativity -Cinema and Audio-visual
Two weeks of open-air screenings of Italian cinema in Canada.

The Italian Cultural Institute of Toronto is pleased to participate in the ICFF Open-Air Cinema, presented by the Italian Contemporary Film Festival (ICFF). Two weeks of special events will be presented in a new outdoor location: the Ontario Place Trillium Park waterfront venue.

These are the titles that will be presented: