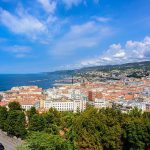 Portal of the Italian language
Categories: Culture and creativity -Visual Arts -Cinema and Audio-visual -Literature and Publishing -Music and Performing Arts
Music, literature, cinema and theatre are brought together to tell the complete story of the city of Trieste.

Trieste in words, music and images: a series of meetings dedicated to the ‘elusive’ city, organized this autumn by the Italian Cultural Institute of Paris.

‘Insaisissable Trieste‘ (Elusive Trieste) opens on 10 October 2021, with a dialogue between Dušan Jelinčič, Pino Roveredo, Pietro Spirito and Mary Barbara Tolusso: four writers from Trieste will present the literary and cultural world of a city on the border between the Latin and Slavic worlds. Once the port of a great empire, long disputed between East and West, it devastated by the tragedies of war, but it has always preserved its cosmopolitan soul and its spirit of openness.

The programme will continue throughout October and November 2021:

The exhibition ‘Leonor Fini. Memorie triestine‘ (Leonor Fini: Memories of Trieste): a selection of paintings, drawings and objects by the painter, illustrator and stage designer, with a particular focus on her formative years in Trieste. The exhibition, open from 6 October to 4 November 2021, is organized in collaboration with ENIT (Ente Nazionale Italiano per il Turismo – the Italian National Tourism Agency) and PromoTurismoFVG (Friuli Venezia Giulia’s Tourism Agency).