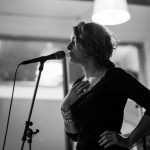 Portal of the Italian language
Categories: Culture and creativity -Music and Performing Arts
Singer Ilaria Pilar Patassini and her team performed at the international jazz festival hosted by the Algerian city.

The Italian Embassy and the Italian Cultural Institute of Algiers sponsored a concert by Italian singer Ilaria Pilar Patassini and her team at the ‘Luna in Ariete’ concert held on 13 May at the Ahmed Bey ‘Zenith’ Hall in Constantina as part of the ‘Dimajazz 2022‘ Jazz festival.

Singer-songwriter and performer Ilaria Pilar Patassini was born in Rome to a father of Tuscan origin and a Costa Rican mother.

Ilaria Pilar is a graduate of the conservatory of singing and chamber music and sings in five languages. She teaches vocal interpretation at Officina Pasolini (Rome). The singer uses her voice to give meaning to her words, but also as a musical instrument in its own right. She naturally combines her Italian roots with jazz, world music and song lyrics to create an original and contemporary sound. His interpretative style offers a lot of room for theatricality and his influences range from classical music, the jazz of Nina Simone to the avant-garde of Edith Piaf .

Since 2014 he has been collaborating with composer Michael Occhipinti and clarinettist Don Byron in the Italian-Canadian Sicilian Jazz Project, taking part in the recording of “Muorica” and touring the most prestigious venues in Canada: Koerner Hall, Vancouver International Jazz Festival, The Cultch, The Bassment, Ottawa ChamberFest, Toronto Summer Music Festival, SaskJazz, Edmonton Jazz Festival and many others.