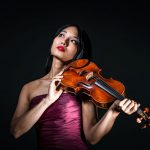 Portal of the Italian language
Categories: Music and Performing Arts
The Japanese violinist will play a 1668 Golden Bell by Antonio Stradivari.

The Italian Cultural Institute of Abu Dhabi is presenting a performance of Japanese violinist Lena Yokoyama, who will present the first public exhibition of a Stradivarius in the UAE, a Golden Bell 1668 by Antonio Stradivari, renowned luthier from Cremona. Among other guests, the students of the International Music Institute Abu Dhabi, directed by Maestro Aldo Dotto. Among the authorities attending, the Mayor of the City of Cremona and the Director of the Violin Museum.

Cremona, the world capital of violin making, home to a prestigious International Violinmaking School and to a Violin Museum, counts among its most illustrious musicians Claudio Monteverdi and Amilcare Ponchielli, initiators of an important tradition in the field of classical and concert music.

This year the city of Cremona celebrates “The art of violin making”, a Lombard excellence recognized throughout the world, tenth anniversary of the Unesco recognition in 2012.