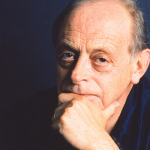 Portal of the Italian language
Categories: Culture and creativity -Literature and Publishing
The anniversary is the occasion to present the new Portuguese edition of 'La testa perduta di Damasceno Monteiro'.

The Italian Cultural Institute of Lisbon invites on 5 April to the presentation of the new Portuguese edition of the book “La testa perduta di Damasceno Monteiro” by the director Stefano Scaramuzzino and José Sasportes, Minister of Culture in 2000-2001.

To commemorate the great Italian writer on the occasion of the 10th anniversary of his death in Lisbon, the Italian Film Festival and the publishing house Publicações D. Quixote present the new revised edition of the book “A cabeça perdida de Damasceno Monteiro”.

A bloody affair. The correspondent of a popular newspaper named Firmino. An anarchic and metaphysical lawyer, obsessed with Norma Base, who looks like Charles Laughton. The ancient and fascinating city of Oporto. A novel that under the guise of an investigation is a reflection on abuse and justice.