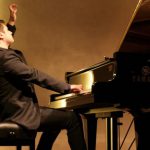 Portal of the Italian language
Categories: Culture and creativity -Music and Performing Arts
The notes of the Maestro's piano resound in the halls of the Italian Cultural Institute of Amsterdam.

On 17 March, the Italian Cultural Institute of Amsterdam presents a piano concert by Maestro Nazareno Ferruggio.

The programme of the performance will range from  sonatas by Scarlatti, to Bach and Beethoven.

Born in 1981, Maestro Ferruggio graduated from the ‘N.Piccinni’ Conservatory in Bari, the Musik Hochschule in Mannheim and the Academy of Music in Bern.

A multiple prize-winner in several national and international competitions, he made his début at the age of twenty-four.

He has played for important festivals such as the Cantiere Internazionale della Musica in Montepulciano, the Ascoli Piceno Festival and the Sommets du Classique in Crans Montana.

In 2011 the Italian Embassy in Jakarta invited him to play a Recital for the 150th anniversary of the unification of Italy.

He recently embarked on a tour of Asia, giving concerts in Myanmar, Singapore and Vietnam.