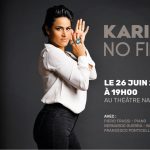 Portal of the Italian language
Categories: Culture and creativity -Music and Performing Arts
The Italo-Algerian singer participates in the 22nd edition of the European Festival.

After six years, Karima is back in the studio to give life to a new project, creating tracks she has always loved and had never tackled before, with respect and love for music and a unique style that unmistakably characterises her. The new record ‘No Filter’, released in May 2021, thus becomes her new musical expression, naturally explosive, made up of contaminations of musical genres such as pop and jazz.

To conceive this new reality and for the forthcoming concerts, Karima relies on people who are special to her, first and foremost friends and great musicians: Francesco Ponticelli on double bass, Bernardo Guerra on drums and Piero Frassi on piano who, with his pen and long-standing collaboration for no less than 18 years, has succeeded in dressing up her voice with worldwide hits such as “Walk on the Wild Side”, “Tears in Heaven”, “Come Together” and “Man in the Mirror”.

‘No Filter’ is a work that was thought out and discussed at length, but at the same time absolutely spontaneous and immediate, as Karima says:

In two days we recorded, we chose to make a maximum of two recordings for each track, so as to preserve the best emotions that are always conveyed in the first few times. I was looking for a sound that would identify me, we chose to use only acoustic instruments, excluding electronics allowed us to work a lot on the dynamics of the performances, adding the orchestra – the Piemme Project conducted by Marcello Sirignano and coordinated by first violinist Prisca Amori, in some tracks. Piero, Gabriele and Bernardo made a fundamental contribution to the realisation with their musical depth and elegance. Finally, we entrusted the mixes to Massimo Aluzzi, whose great sensitivity gave the work the right balance.