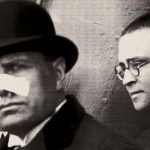 Portal of the Italian language
Categories: Culture and creativity -Literature and Publishing
The book traces the story of Enzo Paroli and Telesio Interlandi against the backdrop of post-World War II Italy and its scores to settle with fascism.

On 25 May, the Italian Cultural Institute of Paris presents the book by Virman Cusenza entitled ‘Giocatori d’azzardo’ (Gamblers), published by Mondadori.

The Sicilian writer and journalist discusses with Giuliano da Empoli the story of Telesio Interlandi, a leading figure in the propaganda machine of the fascist regime, who in the post-war period was hidden and saved by Enzo Paroli, a socialist and anti-fascist lawyer, until his case was dismissed.

Inspired by a feeling of ‘pietas’, Paroli‘s gesture is an act of humanity, of solidarity that breaks through dividing lines, iron curtains and walls, even if it has nothing to do with forgiveness.

Many years later, the story ended up capturing the interest of Leonardo Sciascia who decided to write a book about the “human fraternity” of Paroli and his “heroic” gesture.

Even today, in a country that has not fully come to terms with its history, the figure of this lawyer deserves to be rescued from oblivion.