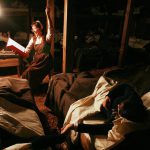 The Italian Cultural Institute of Santiago has taken part in the organization of the Santiago a Mil Festival, an international festival that includes theatre, dance and music events. The varied cultural programme of Italian artists includes live performances and works that are available for free on teatroamil.tv.

‘Tragedia Endogonidia’, directed by the Italian artist Romeo Castellucci, is a unique work that spans a three-year period (2001-2004) and which unfolds across various stages. Each episode refers to a city which gives the story its name.  The Tragedia Endogonidia is a series of ideas, images and concepts which have been created in each space, and which have been organized into a dramatic cycle based on the form of Greek tragedy. A format inherited from the past that serves to portray the immediate and present concerns of the 21st century.

A new episode will be presented every Tuesday and Friday in January, February and March on teatroamil.tv.

Based on Charles Perrault’s classic, ‘Tom Thumb’, this version, released in 2010, is a radio play you can listen to. With narration by Maria Izquierdo, this work that premiered in 2010 – in a special format that allowed viewers to lie on their beds and listen to the story with their eyes closed – has now been adapted to an intimate format for the whole family. ‘Buchettino’ is an invitation to let oneself be carried away by the imagination through the story of Tom Thumb. It was based on an idea by Chiara Guidi, inspired by Charles Perrault’s classic and created by Aline Kupenheim.

A multidisciplinary retelling of one of Dante’s most famous canticles, written by award-winning playwright Marco Antonio de la Parra. Dante’s masterpiece invites the audience to travel through Hell, Purgatory and Paradise in a poetic reflection that incorporates theology, philosophy and politics. This multidisciplinary and immersive show brings together visuals, sound, poetry and performance, unfolding as an electronic music concert and a great piece of acting by Néstor Cantillana. In addition, there will be a special appearance by the playwright himself and stage and musical direction by Daniel Maraboli.

The show will be held at the Finis Terrae Theatre in Providencia.