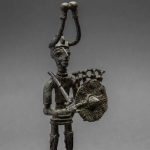 Portal of the Italian language
Categories: Visual Arts -Archaeology and Heritage
At the Archaeological Museum of Thessaloniki, an exhibition of exceptional finds from the different Sardinian cultures of the pre-Roman era.

Following Berlin and St Petersburg, the exhibition ‘Sardegna Isola Megalitica. Dai menhir ai nuraghi: storie di pietra nel cuore del Mediterraneo’ (Sardinia, Megalithic Island. From menhirs to nuraghi: tales of stone in the heart of the Mediterranean) arrives in Thessaloniki, from 11 February to 15 May, before moving on to Naples. The exhibition, dedicated to the ancient cultures of Sardinia,

was inaugurated at the Archaeological Museum of Thessaloniki on Friday 11 February, attended by Greek and Italian authorities. It includes finds from different eras and sheds light on the cultural stratification of pre-Roman Sardinia.

There are numerous and of various works on display: the tombs of the domus de janas from the Neolithic and Eneolithic periods; the statue reproductions of ‘mother goddesses’, sometimes true masterpieces; the architecture of the nuraghi, built during the Bronze Age; the ‘giants’ tombs’; the extraordinary Nuragic bronzes depicting women, men, warriors and animals; votive swords; little models of buildings and ships; the monumental ‘Warriors of Mont’e Prama’, self-representation of a mythical past referring to the apogee of the Nuragic Age, but made in the middle of the Iron Age. Thanks to the Italian Ministry of Culture and the direction of the National Archaeological Museum of Cagliari, the exhibition will also feature the ‘Boxer’, a sculpture almost two meters tall, never loaned before.

The exhibition event ‘Sardegna Isola Megalitica. Dai menhir ai nuraghi: storie di pietra nel cuore del Mediterraneo’ is promoted by the Region of Sardinia, the National Archaeological Museum of Cagliari and the Regional Directorate of the Museums of Sardinia, with the support of the Italian Embassy in Athens and the Italian Cultural Institute of Athens. The exhibition has been awarded the Medal of the President of the Republic.