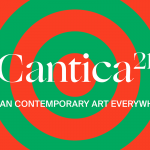 Portal of the Italian language
Categories: Culture and creativity -Visual Arts
The Chilean stage of the large-scale exhibition ‘Cantica21’.

Leonardo Petrucci’s piece ‘Tessitura Cosmica’ will be presented in Santiago as part of the ‘Cantica 21‘ art exhibition, the initiative which was jointly launched in September 2020 by the Ministry of Foreign Affairs and International Cooperation and the Ministry of Culture for the dissemination and promotion of Italian contemporary art around the world.

As part of the global exhibition ‘Cantica21‘, and on the occasion of the 17th edition of Contemporary Art Day, the piece ‘Tessitura Cosmica’ by Italian artist Leonardo Petrucci is being presented in the hall of the Italian Cultural Institute of Santiago.

‘Tessitura Cosmica’, a piece acquired by the Centro Pecci of the city of Prato, expresses the artist’s strong interest in science and astronomy, which have been a part of his work for a decade. Inspired by the composition and shapes of ferrous meteorites, the artist invites us to observe the patterns of cosmic symmetries and then to reflect on the relationship between the universe and the human being and, at the same time, between the human being and nature, society and history.

Petrucci offers an interesting interpretation of meteors in the form of weaving patterns, reinterpreting them through the artistic medium of tapestries which engage in a dialogue between the natural and artificial, between science and art.

In the rooms of the Santiago Institute, Leonardo Petrucci’s work ‘Tessitura Cosmica’ will also enter into dialogue with a series of scientific panels dedicated to the astronomical phenomenon of meteorites, with a particular focus on the physical phenomena that make the formation of such spectacular structures possible. It is no coincidence that ‘Tessitura Cosmica’ is on display in Chile, one of the countries with the best record for astronomical observation on the entire planet.

‘Cantica21‘ is an initiative promoted by the Ministries of Foreign Affairs and International Cooperation and by the Ministry of Culture. After a selection competition, which saw the participation of almost three hundred artists and collectives from all over Italy, a total of 45 winners were selected, including both emerging and well-established artists, as well as a number of projects dedicated to Dante Alighieri on the occasion of the 700th anniversary of the Supreme Poet’s death. The result is a large-scale art exhibition that showcases and promotes contemporary Italian art, displaying its best products in various venues of the Italian Cultural Institutes, Embassies and Consulates around the world.