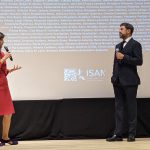 Portal of the Italian language
Categories: Culture and creativity -Cinema and Audio-visual
The hall of the Italian Cultural Institute was packed with people applauding Pierfrancesco Favino.

On 27 October, the Italian Cultural Institute in Brussels welcomed actor Pierfrancesco Favino for the European premiere of Mario Martone’s film ‘Nostalgia’, an event organised with the Italian Embassy and Medusa Film.

Nominated for the Palme d’Or for best film at Cannes 2022 , and winner of the Nastro d’Argento for best director, best leading actor, best supporting actor and best screenplay, the feature film has been chosen to represent Italy in the Oscar race for best international film.

The star, actor Pierfrancesco Favino, entertained the Institute’s movie theatre packed with spectators. The event was attended by the Italian ambassadors to Belgium and the EU institutions, Francesco Genuardi and Pietro Benassi respectively, Medusa Film CEO Giampaolo Letta and the director of the Italian Cultural Institute Allegra Iafrate.

Presenting the work in Brussels, a setting characterised by a European and international dimension, was the first step towards an Oscar nomination, a recognition that would be very important for the Italian film sector which has returned to the centre of the European cultural debate in recent years.