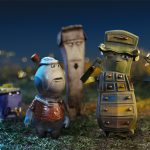 Portal of the Italian language
Categories: Culture and creativity -Visual Arts -Cinema and Audio-visual
To mark the occasion of COP26, a new stage of the exhibition dedicated to sustainability and recycling.

As part of COP26 , the exhibition ‘Trash‘ opened on December 14, 2021, at the Italian Cultural Institute of Algiers, promoted by the Ministry of Foreign Affairs and International Cooperation and organized by the Embassy of Italy and the Institute, in collaboration with the UK Embassy and the British Council. In conjunction with the opening of the exhibition, the the film ‘Trash – The legend of the magic pyramid’ (2020) was screened.

The film, which is the first feature film produced by the Al One film production company in Rome, with the contribution of the Ministry of Culture, was screened in Italian with French and English subtitles.

The ‘Trash’ exhibition, dedicated to the themes of sustainability and recycling, tells the story of the creative universe of 3D digital animation, discovering the fascinating dialogue between directors and experts in new technologies in a journey from conception to screenplay. Through a wide selection of drawings, storyboards and video material, the exhibition shows the various creative, technical and production phases behind the film, directed by Francesco Dafano and Luca Della Grotta. The exhibition will be open until January 31, 2022.