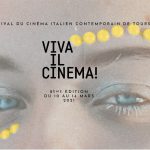 For the third consecutive year, the Italian Cultural Institute of Paris partners up with ‘Viva il cinema!’, the festival of Italian contemporary film founded in 2004 in Tours and dedicated to the discovery of new talent in Italian film, inviting renowned and upcoming directors to present their films in competition each year.

This year, due to the health emergency, the Festival invites you to discover three films online on 10, 12 and 13 March.

We have chosen to screen three films from our online programme that are very representative of the Italian film we love, which is both a testament to Italy’s turbulent history and an ode to hope and life. – Louis D’Orazio, Artistic Director of the Festival ‘Viva il cinema!’

The films can only be viewed in France and booking is required.
To find out more, go to iicparigi.esteri.it and viva-il-cinema.com