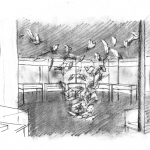 Portal of the Italian language
Categories: Culture and creativity -Visual Arts
On 10 May, the exhibition opens with an online event that offers a focus on the library of the Renaissance Genius.

On 10 May the exhibition ‘Leonardo da Vinci’s Intellectual Cosmos’ opens in Berlin, a reworked and enriched version of ‘Leonardo e i suoi libri: la biblioteca del Genio Universale’ (Leonardo and his books: the library of the Universal Genius), conceived by the Museo Galileo  and curated by Carlo Vecce, set up in Florence (Museo Galileo, 6 June – 22 September 2019) and in Rome (Accademia dei Lincei, 4 October 2019 – 12 January 2020).

Leonardo was not, as is usually believed, a ‘man without letters’. Passionate reader, at the end of his life he will come to possess almost 200 volumes: an extraordinary number for a fifteenth-century artist-engineer. Leonardo’s library is one of the lesser known aspects of his laboratory, because it is a ‘lost library’: only one book has so far been identified. The exhibition attempts to reconstruct this library through the many indications present in Leonardo’s writings: names of authors, titles of works, lists of books, citations.

This complementary use of traditional philological methods on the one hand and of the most recent techniques of digital humanities on the other, helps us to better understand the past in which Leonardo lived and allows us to delve even better into that relationship between humanism and science that he has able to summarize in his work. – Min. Alessandra Molina, Chargé d’affaires of the Italian Embassy in Berlin

The exhibition will be open to the public from 11 May to 28 June 2021 at the Staatsbibliothek in Berlin, in the manner prescribed by the anti-Covid safety regulations. Alongside precious books from Berlin libraries, various exhibits will be on display, including ancient printing machines, which will allow visitors to ‘take a look’ at Leonardo’s lab.

The online inauguration scheduled for 10 May, from 17.00 to 19.00, accessible on YouTube, anticipates the opening.

The event program and more information are available on www.mpiwg-berlin.mpg.de

The exhibition makes ‘visible’ the rich intellectual universe behind Leonardo’s creations. It is a small exhibition but, as Leonardo wrote, ‘d’ogni cosa la parte ritiene in sé la natura del tutto’ (of everything the part retains in itself the nature of the whole). – Prof. Jürgen Renn, director of the Max-Planck Institute for the History of Science

The exhibition at the Staatsbibliothek is enriched by the virtual exhibition ‘Leonardo’s library’ produced by the Galileo Museum, accessible starting from 5 May on mostre.museogalileo.it

It is an extraordinary resource accessible in eight languages, the result of the collaboration of the Museo Galileo with the Ministry of Foreign Affairs and the National committee for the celebrations of the 500th anniversary of Leonardo da Vinci’s death. Thanks to the digital representation of all the manuscripts and printed matter collected by Leonardo, his library comes back to life on the web. – Prof. Paolo Galluzzi, Scientific Director of the Museo Galileo

The Museo Galileo, one of the most important historical-scientific museums at an international level, preserves the precious Medici and Lorraine collections of scientific instruments. It is also a world-class documentation and research institute in the field of the history of science and technology, which makes available to scholars the huge patrimony of its library – which includes over 170,000 volumes, brochures and non-paper material – and of its very rich website.

Founded in 1994, the Max-Planck-Institut für Wissenschaftsgeschichte (MPIWG) in Berlin is one of more than 80 research institutes administered by the Max-Planck Society. Dedicated to the study of the history of science, its main focus is the understanding of scientific thought and its applications as historical phenomena through global projects spanning all periods of human history.