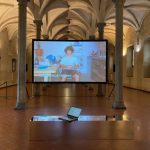 Portal of the Italian language
Categories: Culture and creativity -Visual Arts
The video installation by the Bologna-based collective, winner of the ‘Cantica21’ public competition: a new stage in the large-scale exhibition of Italian contemporary art.

On the occasion of the 17th edition of the Contemporary Art Day, and as part of the large-scale exhibition ‘Cantica21‘, the Italian Cultural Institute of Budapest presents ‘Affari di famiglia’ (Family Affairs), a video installation by the ZimmerFrei Collective.

The artistic, documentary and anthropological project portrays the ‘state of the art‘ contemporary family in Italy in an original way. It comes in the wake of ‘Family Affair’, a series of performances carried out between 2015 and 2018 in eight European cities which then continued in Egypt, Greece and China. The video installation comprises about one hundred video portraits of people of all ages, belonging to different types of families, distributed throughout Italy. The portraits are all in the same format: the subjects are in the centre of the frame, set in their home environment and posing as if for a long-exposure shot.

The voice-over of each of the subjects tells a story about their family. Instead of looking at the lens as in an ordinary portrait, the characters have their eyes closed, appearing absorbed and alert at the same time, listening to their own thoughts and the flow of memories, as well as to the noises coming from the rest of the house. From the structure of increasingly dispersed and networked families emerges the value of coexistence as a lived social life, one involving the inventiveness of everyday life, looking forward the future, sharing spaces, highly polished time management systems and an arena of inevitable conflicts, along with unexpected rewards and growth.

The video installation will be available and open to the public until 7 January 2022.

ZimmerFrei is a group of artists founded in Bologna in 2000 consisting of Massimo Carozzi (musician and sound designer), Anna de Manincor (artist and filmmaker) and additionally, up until 2019, by Anna Rispoli (artist and director). ZimmerFrei produces sound and video installations, performances, documentary films and photographic series and is dedicated to the investigation of real and imaginary urban spaces, mixing practices from cinema, theatre and music. Recent works are portraits of cities and citadels (CERN in Geneva, the port district in Marseille, the Mutonia sculpture park, a street in Brussels, the island of Terschelling, a hill in Copenhagen, a neighbourhood in transformation in Budapest, the river front in Chalon-sur-Saône and Bologna as adoptive city and the formation of a new idea of citizenship), narratives that intertwine documentary, sound writing and visionary work and explore the boundaries between public spaces and private land. In 2019 ZimmerFrei won the Italian Council Prize for Contemporary Art from the Ministry of Culture (MiC). In 2011, the MAMbo museum in Bologna dedicated a solo exhibition to ZimmerFrei and acquired a light sculpture from the Permanent Collection, installing it at the entrance of the Cineteca di Bologna. In 2008 ZimmerFrei won a residency at the ISCP in Brooklyn/NYC with the Pagine Bianche prize. In 2002 Anna de Manincor/ZimmerFrei exhibited at the 50th Venice Art Biennale curated by Francesco Bonami, in the pavilion dedicated to young artists and curated by Massimiliano Gioni.

‘Cantica21‘ is an initiative promoted by the Ministry of Foreign Affairs and International Cooperation and by the Ministry of Culture. After a selection competition, which saw the participation of almost three hundred artists and collectives from all over Italy, a total of 45 winners were selected, including both emerging and well-established artists, as well as a number of projects dedicated to Dante Alighieri on the occasion of the 700th anniversary of the Supreme Poet’s death. The result is a large-scale scattered art exhibition that showcases and promotes contemporary Italian art, displaying its best products in various venues of the Italian Cultural Institutes, Embassies and Consulates around the world.