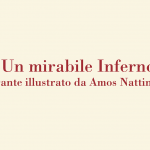 Portal of the Italian language
Categories: Culture and creativity -Visual Arts -Literature and Publishing
A monumental edition of the Divine Comedy on display at the Farnesina and then abroad.

The Ministry of Foreign Affairs and International Cooperation is taking part in the celebrations for the 700th anniversary of the death of Dante Alighieri with an exhibition of illustrations of Dante’s Inferno created by Amos Nattini (1892-1985), a leading figure on the Genoese and national art scene at the beginning of the last century.

Nattini produced a monumental edition of the Divine Comedy with his own illustrations. The copy in the Ministry Library was donated in 1927 by the artist to the then Undersecretary of State at the Ministry of Foreign Affairs, Dino Grandi. The work consists of the first 17 cantos of Inferno, which correspond to 16 illustrations and some pre-text plates. The restoration of the volume and its illustrations was made possible thanks to the work of the Central Institute for the Pathology of Archives and Books (ICPAL).

The exhibition, organized by the Analysis, Programming, Statistics and Historical Documentation Unit and the Directorate-General for the Promotion of the Country System, is on display at the Farnesina from 14 to 28 September 2021 and, subsequently, in various Italian Embassies and Cultural Institutes abroad.

The inauguration is scheduled for 14 September and will be followed by a guided tour. The presentation event will also be open to the public, in compliance with current Covid-19 regulations, and subject to registration by writing an email with name and surname to biblioteca.mae@esteri.it, no later than Monday 13 September, subject to availability.

The exhibition will be open until 28 September. For more information www.esteri.it email: biblioteca.mae@esteri.it