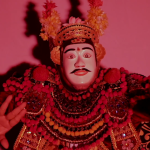 Portal of the Italian language
Categories: Culture and creativity -Cinema and Audio-visual -Music and Performing Arts
Dante in Jakarta with a performance-based web series inspired by the Divine Comedy.

A journey into Dante’s universe that combines impressions from the Divine Comedy with the enchanted worlds of oriental mythology, both from an iconographic, philosophical and theological point of view. It is titled ‘VideoDante# Indonesia’: a performance-based web series created by the Instabili Vaganti theatre company and produced by the Italian Cultural Institute of Jakarta, as part of the celebrations for the 700th anniversary of the Supreme Poet’s death.

The web series, inspired by the Divine Comedy, combines tradition and innovation, literature and performing arts, in an intercultural dialogue between Italy and Indonesia.

The project, directed by Anna Dora Dorno, brings the Italian performer Nicola Pianzola and three Indonesian artists to the stage, in an artistic collaboration that took place at a distance, traversing different cultures and online platforms.‘VideoDante # Indonesia’ (Italy – Indonesia, 2021) is in fact a rare example of virtual theatre that brings together different performing arts and which involves, through a remote artistic collaboration, the Italian theatre company Instabili Vaganti, the Balinese dancers Made Suteja and Elly Evyana, the Balinese shadow theatre performer Kadek Budi Setiawan and Gamelan musician Rosemainy Buang, in order to explore the numerous connections between Dante’s work and oriental culture.

The initiative is supported by the Fondazione del Monte di Bologna e Ravenna and sponsored by the Municipality of Ravenna and Viva Dante.

To get to know the project up close iicjakarta.esteri.it

Beneath the Giant's feet

The land of tears

Upon a desert shore