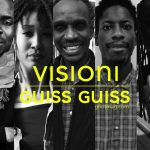 Portal of the Italian language
Categories: Culture and creativity
The Italian Cultural Institute of Dakar and GRIOT present a new video project dedicated to the Italian-Senegalese community.

From the early 1980s to today, the Senegalese community in Italy has grown exponentially to become the second largest in Europe and today amounts to over 100,000 people. Many, many members of the Italian-Senegalese community have distinguished themselves in the world of culture, arts and sport.

With the ‘Visions – Guiss Guiss’ project, the Italian Cultural Institute of Dakar and GRIOT present a series of video interviews with seven protagonists of Italian culture who have their roots, by birth or by family, in Senegal. The protagonists speak of their life, their work and their vision – their ‘guiss guiss’, as they say in Wolof – on the many nuances of being Italian and Senegalese, between presence and absence within geographical, social and cultural boundaries.

The interviews, published every Monday starting 1 February, are available here and on the Institute’s social channels (Facebook, YouTube).