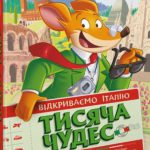 The special volume dedicated to the wonders of Italy is set to feature in Ukrainian schools, libraries and homes.

From today, Ukrainian children will also be able to get involved in the new treasure hunt dedicated to the wonders of Italy, starring Geronimo Stilton – the mouse journalist so loved by children around the world, created by Elizabeth Dami. Mille Meraviglie. Viaggio alla scoperta dell’Italia (Thousand Wonders: Journey to Discover Italy), the new book of 224 pages cleverly exploring Italy, is a special project by the Ministry of Foreign Affairs and International Cooperation, in collaboration with the Italian National Commission for UNESCO, produced by Edizioni Piemme-Mondadori Libri, with the aim of introducing girls and boys from all over the world to the artistic and cultural wonders of Italy.

From Rome to Venice, from the Apennines to the Alps, the friendly reporter visits the most famous monuments and places (including many of Italy’s UNESCO World Heritage Sites), without forgetting the hidden gems: lesser-known treasures, gastronomic specialities, places of scientific research, craftsmanship and industrial products. An adventure imagined as a real treasure hunt, full of games, curiosities and surprises.

The initial project featured special editions in four languages (Italian, French, Spanish, English), for the cultural network of the Ministry of Foreign Affairs: Embassies, Consulates, Italian Cultural Institutes, Schools abroad in collaboration with Atlantyca Entertainment for the international editions. L’Embassy of Italy in Kiev and theItalian Cultural Institute, aware of the importance of children’s literature, strongly advocated a translation into Ukrainian. The idea–totally new to the local publishing scene–was enthusiastically welcomed by IRBIS Komiksi, one of the most prestigious publishers in Ukraine. The project began a few months before the start of the war and has just been completed despite the great difficulties at this time.

The Cultural Institute of Kiev, temporarily active in Lviv, is developing appropriate promotional strategies with the dynamic children and teen book sector of the Lviv library network. Ukrainians are passionate readers from childhood and the numerous children’s libraries enjoy flourishing interactive and fun book presentation activities. There are currently around 3,000 printed copies of Geronimo Stilton in Ukrainian; but, according to the publishing house’s forecasts, circulation will increase significantly in the coming months, enriching the Italian children’s literature found in Ukraine, which includes the classics by Collodi (Pinocchio) and Rodari (nursery rhymes and stories).  The initiative will have a significant impact on Italian-Ukrainian cultural relations, at a time in which the national language is acquiring an increasingly strong identity as compared to the past, in a country that is traditionally bilingual (Ukrainian-Russian).