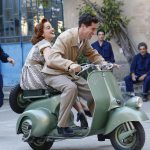 On the occasion of Fare Cinema 2021, the ‘Biopic’ project was born. In collaboration with Moviheart and RaiCom, it presents two fictional films that tell two fascinating stories about the creative and entrepreneurial capacity of our country.

The films will be available free of charge on the MyMovies platform for Italian Cultural Institutes worldwide.