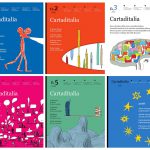 Portal of the Italian language
Categories: Culture and creativity -Literature and Publishing
A project of publications and monographs on Italian art and culture in the new Millennium.

Cartaditalia was created in 2008 at the Italian Cultural Institute in Stockholm. This project aims to offer the international audience orientation tools consisting in ‘maps’ (Cartaditalia actually means ‘a map of Italy’) of the most diverse fields of Italian art and culture in the new Millennium; the maps are made by the best specialists in each field.

The Italian Cultural Institute in Brussels has re-worked publications from 2015 to 2019 giving them a new graphic format and translating them into four languages (Italian, French, Dutch and English).

Each of these monographic issues provides a broad and topical overview of its subject matter. The following are available for free download: