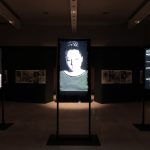 Portal of the Italian language
Categories: Culture and creativity -Visual Arts -Cinema and Audio-visual
A video opera for the International Holocaust Remembrance Day 2021.

For International Holocaust Remembrance Day 2021, Studio Azzurro Produzioni has produced  a documentary film version of the project ‘Testimoni dei testimoni’ (Witnesses of the witnesses) for the Ministry of Foreign Affairs, capturing the experience of the exhibition and the sensitive journey made in 2019 at the Palazzo delle Esposizioni in Rome for the web.

“The sensitive journey made at Palazzo delle Esposizioni in 2019 stems from a project by some students who participated in the Journey of Remembrance to Auschwitz and the encouragement of the Municipality of Rome. This group of highly motivated young people has chosen the name ‘Generazione Testimoni’ (‘the Witness Generation’) for themselves. In their meeting with Studio Azzurro, they conceived the idea of an experiential journey to be proposed to the public to experiment with new languages in order to raise awareness. Generazione Testimoni ‘s mission is to convey the memories of witnesses who have survived concentration camps, so that “lest we forget” does not become a mere consolatory expression.

After the first Journey of Remembrance, the group decided to repeat the experience and to help the witnesses, now elderly, to tell  their story. Their meeting with Studio Azzurro led to the creation of an exhibition at the Palazzo delle Esposizioni in Rome. It consisted of several installation areas at the centre of which were the voices of the surviving witnesses and the testimonies of the ‘witnesses of the witnesses’, i.e., young people.

These installation areas led Studio Azzurro to a moment of further reflection: how to reach the emotional sensitivity of people entering them? How not to distress them with the shocking sight of what they already know, and how to take them beyond being accustomed to such a horrific sight?  How to have them perceive the truthfulness and authenticity of images they have seen so many times without really ‘seeing’ them?

The language developed by Studio Azzurro often resorts to asynchrony and unexpected combinations of images and sounds. In this work, we felt the need to push this possibility to the limit, to the point of completely renouncing the correspondence between sound and visual elements. This choice we made in the process of preparing the documents and defining the areas, led us to experiment with sound and develop as many visual solutions as are able to take visitors to a dimension in which they are up close with the message conveyed, but with a part of this message still ‘missing’”. And it is precisely that apparently ‘missing’ element that has made it possible to develop audio stories, photographic apparitions and video sequences, arranged in a relationship that is unprecedented and therefore capable – we believe – of restoring those intimate but necessarily ‘over-exposed’ documents to their auroral status, to protect remembrance.

The video document proposed here takes on multiple forms of remembrance, weaves them into a layered fabric, similar to the one that ‘naturally’ builds up the personal memories of every individual: silent images that are responsible for showing the point of no return of the encounter with the unspeakable reality of the Holocaust, with both its visible and invisible elements, all present in the voices of surviving witnesses, including Sami Modiano and Tatiana Bucci, mentioned above, who along with other witnesses have personally met with the students undertaking the Journey of Remembrance. They hand us what we could not see and which, without their broken voices, would have been lost in the thick fog of forgetfulness.

The voices and faces of today’s students are a counter-melody, as they state their commitment to save us from lethal forgetfulness, aware that it is only by taking on the memories of those who lived that we can try to manifest daily actions aimed at making it possible to build a future that will not replicate that past.

The video document starts with an aerial image of the ‘Auschwitz complex’: 3 major camps and 47 sub-camps over 40 square kilometres. A great machine, designed with diligent and geometric precision. Cheering voices rise from the silence, their rhythm is that of a running train. It is the exalted rhythm of crowds cheering for Hitler’s and Mussolini’s speeches. We are on the train to Auschwitz and as Hitler’s voice fades away, we enter the camp and start hearing the voices of surviving witnesses. Fragments of grief-ridden, unbearable memories emerge from the images, together with the essential data on the capacity of the ‘extermination machine’.

The images become paradoxical slides in motion, defective as in an empty moment they show us what nobody wants to see, and eventually the projector stops on a set of twin girls whose eyes will forever question those looking at them. The faces of the ‘witnesses of the witnesses’ return and dwell on simple, everyday details, those that almost miraculously allow us to understand, at least with the senses of our imagination, the memories of the other. “

In 1982 Fabio Cirifino, Paolo Rosa and Leonardo Sangiorgi launched an experience that over the years has explored the poetic and expressive possibilities of new technological cultures; from 1995 to 2011, Stefano Roveda, an expert in interactive systems, also joined them.

Through the creation of video environments such as ‘Il nuotatore (va troppo spesso ad Heidelberg)’ in 1984, sensitive environments such as ‘Tavoli (perché queste mani mi toccano)’ in 1995, museum itineraries, theatrical performances and films, they have designed an artistic journey that crosses traditional disciplines and have formed a working group open to different contributions and important collaborations with Gruppo Memphis, Piero Milesi, Giorgio Barberio Corsetti, Giorgio Battistelli, Moni Ovadia and many others.

Studio Azzurro’s artistic research initially resulted in the creation of video environments in which to experiment with the combination of electronic image and physical environment, aimed at putting the viewers at the centre along with the perceptual paths they are taking.

In 1995 Studio Azzurro began creating sensitive environments, i.e. that react to the presence of those who enter them, and in which the narration starts when people enter and move around. Interaction with devices occurs via natural interfaces triggered by everyday movements such as touching things, walking on the floor, making sound.

The 2000s brought a need for interaction with the local territory. Studio Azzurro’s planning and design o started to focus on exhibitions and museum itineraries to be enjoyed in a new way, as they touched on themes related to the local communities and the enhancement of their memories. A new formula was thus created for narrative museums, the ‘archetype’ of which is the Audiovisual Museum of the Resistance, established in 2000; subsequently, another formula was created, the bearers of stories, a series of works including ‘In Principio (e poi)’, now housed in the collection of the Vatican Museums.