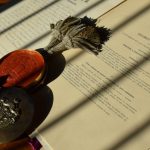 Portal of the Italian language
Categories: Culture and creativity -History and current events -Archaeology and Heritage
A new column recounts the history and characteristics of the Historical Diplomatic Archive and Library of the Ministry of Foreign Affairs and International Cooperation.

The Historical Diplomatic Archive and Library of the Ministry of Foreign Affairs and International Cooperation are responsible for preserving an important bibliographic and documentary heritage, which represents the institutional memory of Italian foreign policy and international relations.

The Library, created on the initiative of Cavour and with an initial endowment of 9,000 books, has, over time, reached a total of over 200,000 volumes. The collections include works on history, philosophy, politics, statistics, geography ans law, as well as an important collection of encyclopaedias and dictionaries.  The antique collection includes some rare, 16th-century first editions and 17th-century publishing masterpieces, cornerstones of Western thought.

The Armao collection was bequeathed by the Minister Plenipotentiary Ermanno Armao and includes antique volumes on geography and cartography, including valuable publications from the 17th and 18th centuries and an important corpus of volumes on Venetian history. Of particular interest is a collection of works that bear witness to the philosophical and theoretical path that led – from the mid-16th century to the mid-18th century – to the development of the modern concept of ‘law of nations’, the foundation of contemporary ‘international law’.

The Historical Diplomatic Archive is responsible for the preservation, reorganisation and the inventory of documents produced by the central departments of the Ministry and by diplomatic and consular missions abroad. Officially established in 1902, it also houses much older archival collections, with documents that date back to the Middle Ages. It is a separate archive which is not required to transfer the papers to the Central State Archive.

The archive preserves around 25 linear kilometres of documentation that reflects the various functions of the Ministry at different times in the history of Italian foreign policy: international relations, representation of Italy’s position in the process of European integration and within international intergovernmental organisations, support for Italian companies abroad, promotion of Italian culture and language, protection of and assistance to compatriots abroad and development cooperation.